Harry Potter and The Chamber of Secrets

Directed by Chris Columbus
Whisks us away for more adventures that keep us on the edge of our seats and cheering for the three young wizards whose resourcefulness in the face of the unknown is awesome.

At the beginning of this second installment in the Harry Potter series, it's near the end of summer break and Harry is staying with his relatives, the Dursleys, who don't approve of him or his wizard studies. He doesn't understand why he hasn't heard from his friends at the Hogwarts School for Witchcraft and Wizardry until Dobby, a strange and masochistic elfin creature, shows up at the house and admits to intercepting his mail to make him think twice about returning to the school. He warns Harry that danger is afoot at his alma mater, and his very life is threatened.

Harry is baffled by this message but before he can get more details out of Dobby, his best friend Ron Weasley (Rupert Grint) arrives in a flying Ford Anglia to rescue him. This sturdy vehicle later serves as a transport for the boys back to school when they are unable to break through the invisible portal at the train station. In the first of many phantasmagorical special effects sequences, the flying car lands in an ancient "Whomping Willow" tree which takes offense at the intrusion and then bounces and bashes the vehicle. We couldn't stop ourselves from sharing a moment of glee watching the car being pulverized by the aggravated tree. How many trees have been smashed, gashed, twisted or totally destroyed by automobiles over the years?

Suffice it to say, the boys emerge safely from this jarring experience and are especially glad to be reunited with their friend Hermione Granger (Emma Watson), who still has a fiery disposition and the quick intelligence they have come to depend upon in all of their adventures together. Harry's old nemesis and archrival Draco (Tom Felton) is still angry at him, and his father, Lucius Malfoy (Jason Isaacs), is on hand to set in motion the idea that the school is making an error by letting in so many mixed blood wizards. He is a nasty fellow whose middle name is arrogance and whose elitist pure blood lectures are toxic.

The returning faculty include Professor McGonagall (Maggie Smith), the deputy headmistress; Professor Snape (Alan Rickman), the potions master; Hagrid (Robbie Coltrane), the gamekeeper who has a soft spot in his heart for Harry, Ron, and Hermione; and Professor Dumbledore (the late Richard Harris), the headmaster who is wise, brave, and patient. Two new additions to the staff are Gilderoy Lockhart (Kenneth Branagh), a pompous and self-absorbed teacher of Defence Against the Dark Arts who in his first session with his students loses control of some pesky Cornish pixies. Professor Sprout (Miriam Margolyes) is also on board as professor of Herbology. She comes in quite handy when some of the students are petrified; the remedy must be made from screeching Mandrakes, creatures straight out of the imagination.

The central plot strand revolves around the Hogwarts' legendary Chamber of Secrets, rumored to be the home of a vile underground monster. Naturally, Harry, Ron and Hermione find themselves drawn to this mystery which threatens the future of the school. Director Chris Columbus and screenplay writer Steve Kloves pull out all the stops in their portrait of this crusade taken on by the talented and fearless trio. It involves a potion that allows them to take the physical form of another person; several encounters with Moaning Myrtle (Shirley Henderson), a ghost; an interactive diary; Tom Riddle (Christian Coulson), a spirit; giant spiders, and the serpentine Basilisk. Our two favorite bits are "the howler," a missive in a red envelope that blows it stack when opened, and the healing ministrations of Fawkes the Phoenix, who spends his leisure moments with Professor Dumbledore.

A major theme in the story is Harry's doubts about his true self, especially when he discovers that he has a rare gift. It is up to Professor Dumbledore to remind our young hero that it is our choices, not our abilities, that determine who we really are. Harry Potter and The Chamber of Secrets whisks us away for more adventures that keep us on the edge of our seats cheering for the young wizards whose resourcefulness in the face of the unknown is awesome.

One of the two discs in the DVD edition is devoted entirely to special features, including 19 additional or expanded scenes; self-guided tours of the Chamber of Secrets, Dumbledore's office, Diagon Alley, and places never shown in the film; conversations with Harry, Ron, Hermione, and other students and professors; plus a 16-minute interview with author J. K. Rowling and screenwriter Steve Kloves. That's not all: The menus are fully animated; there are more than 15 animated puzzles, screensavers, matching challenges, and magical trading cards, and other activities; and viewers can navigate some of the scenes and games with their remote control.. 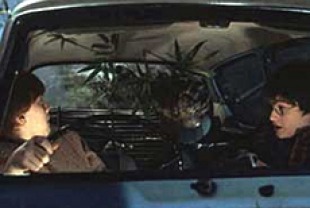 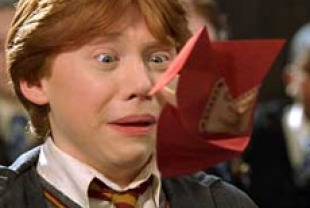 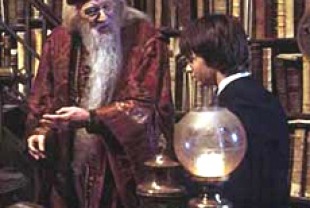