Directed by Spike Jonze
A powerful movie about the passions that sometimes fuel our best achievements and other times leave us stranded with nothing more than our lesser appetites.

Passion is a thundering energy in the lives of many creative individuals. They are able to commit themselves to something and then give it all they've got. Others are less successful at bringing their desires to fruition. Fear may stifle them or a lack of inner vitality keeps them from really getting into their project. They watch from the sidelines, yearning to be enthralled. This tension is at the heart of Adaptation, a wild and inventive film directed by Spike Jonze and written by Charlie Kaufman, the team responsible for Being John Malkovich.

The drama plunges us into the chaotic life of a California screenwriter who is desperately trying to find an inventive and yet honest way to adapt a well-written nonfiction book about flowers for the screen. The Orchid Thief was written by Susan Orlean, a New York-based journalist who became fascinated with an eccentric Florida orchid collector. When these individuals collide, the ensuing fireworks create an action-packed finale. Anyway you look at this playful and well-acted drama, it comes up a winner.

Charlie Kaufman (Nicolas Cage), just off his success with Being John Malkovich is hired by Valerie (Tilda Swinton), a film studio executive, to adapt Susan Orlean's book. At lunch to discuss the project, he tries to state his noble intentions to remain true to the book's pensive style. But mostly he sweats. Charlie is a self-hating, balding, and overweight man who almost immediately begins to doubt his ability to do this project.

His twin brother Donald (also played by Nicolas Cage) is camping out in a spare room at Charlie's Hollywood home. This fun-loving and laid-back fellow has decided to become a screenplay writer too. While Charlie is experiencing a bad case of writer's block, Donald comes up with a cliché ridden thriller about a serial killer with multiple personalities. And while Charlie strikes out with his girlfriend Amelia (Cara Seymour), who wants more romance from him, Donald scores with Caroline (Maggie Gyllenhaal). To make matters worse, guess whose screenplay is finished first and wins the accolades of the industry?

Through a series of flashbacks we are treated to the unfolding of Susan Orlean's (Meryl Streep) New Yorker magazine article on orchid lover John Laroche (Chris Cooper), a clever and zealous collector who was arrested for pirating some rare plants from an Everglades preserve with some Seminole Indians. When Orlean meets Laroche, this married woman realizes the tepidness of her existence compared to Laroche's zealous one. At first skeptical, believing John has delusions of grandeur, she is fascinated when he talks about one obsession after another. "I suppose I did have one unembarrassed passion," she says in a voiceover, "I wanted to know what it feels like to care about something passionately."

Meanwhile, Charlie has been studying up on orchids and trying to tell a story that will make audiences understand their enchantment. But it isn't working and he decides he needs to meet Susan in order to jumpstart his screenplay and pull himself out of the doldrums. But, although he is sexually attracted to her, he's unable to gather the courage to speak to her in a chance encounter in an elevator. Down in the dumps, Charlie decides to follow his brother's advice and attend a screenwriting seminar led by Robert McKee (Brian Cox). There he is told that audiences are always won over by conflict and the ending of a movie. Nobody is going to sit through his story unless the characters change in some way. Charlie enlists Donald's help and they head down to Florida to find out just what is going on between Susan and John Laroche. Suddenly, all of these individuals find their passions bubbling over and the results are strange and unsettling.

Adaptation will appeal to those who found Being John Malkovich a real trip. It will also speak to those who want more movies about character and less emphasis upon stunts and special effects wizardry. The last section of the drama is a bit disappointing but clearly the filmmakers are making a point about Hollywood's capitulation to commercialism and its dependence upon the trinity of sex, drugs, and violence in so many storylines. "Adaptation is a profound process," John Laroche tells Susan, "It means you figure out how to survive in the world." Kaufman himself adapts as he writes an adaptation of a book about plants that are masters of adaptation.

Nicolas Cage puts in his best work in many years as the two screenwriting brothers. Chris Cooper's depiction of John Laroche is colorful and convincing; it earned him the Academy Award for Best Performance by a Supporting Actor. Meryl Streep proves yet again that she is a great actress. Adaptation is one of the best movies in many a moon about the passions that sometimes fuel our greatest accomplishments and other times leave us stranded with nothing more than our lesser appetites. 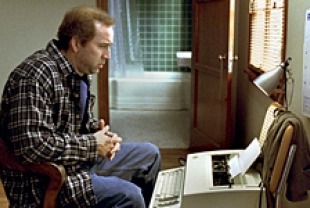 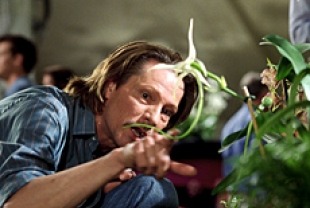