Deliver Us from Eva

Directed by Gary Hardwick
An entertaining and insightful comedy about one way to handle a difficult person who is causing major distress in your life.

How do you handle difficult people? You know, the ones who make you feel small, irritate you with their foibles, rip you up with their criticism, or cause you major distress just by walking in the room. We convince ourselves that they are the ones causing all the misery in our lives. But the truth is that although these troublesome individuals may sap our energy and distract us from matters at hand, we can push past our resistances and learn from them. From a spiritual perspective, life is a school and difficult people are the faculty.

Eva (Gabrielle Union) is a take-charge African-American woman who has been looking after her three sisters since their parents died in a car crash when she was 18 years old. Kareenah (Essence Atkins) and Jacqui (Meagan Good) are married, and Bethany (Robinne Lee) is dating a cop. The sisters hang on Eva's every word, and she is not very kindly in her assessments of their men. Tired of playing second fiddle to this domineering woman and angered by her know-it-all attitude and biting criticism of them, Tim (Mel Jackson), Darrell (Dartanyan Edmonds), and Mike (Duane Martin) decide to teach her a lesson by paying Ray (James Todd Smith, aka LL Cool J), a smooth operator with women, to date, distract, and then ditch Eva. The truck driver gets his first view of this high-strung woman as she is ranking out the manager of a restaurant. She's a health inspector who has absolutely no tolerance for slip-ups or irresponsible actions that could jeopardize the pubic. Despite what he's heard and seen, Ray is convinced that he can work wonders with Eva. And he's right.

Gary Hardwick directs this romantic comedy he co-wrote with James Iver Mattson and B. E. Brauner. Ray is a relaxed and laid-back suitor who usually says the right things, even when the demanding Eva pushes his buttons. When their relationship blossoms into love, the three other men discover that their plan has backfired. Now Eva's sisters are critical of their sexuality and sensitivity. Next they come up with a far-fetched means of knocking Ray out of the picture. But in the process, they realize that most of their problems stem from their own inadequacies and not from Eva's interference.

LL Cool J carries this film with his engaging portrait of Ray, a patient man who falls in love and finds out what really is important to him. Gabrielle Union is just right as the perfectionist Eva, a woman whose heart is tenderized when she lets down her defenses and decides to abandon her role as surrogate mother to her grown sisters.

DVD extras include an entertaining audio commentary by the director Gary Hardwick, a few deleted scenes, a behind-the-scenes featurette, plus, of course, the music video by LL Cool J. 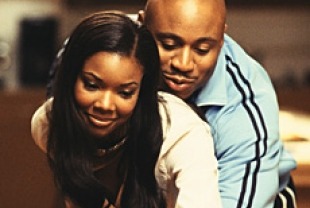 Read our reflections on Openness in Deliver Us from Eva