Directed by Gus Van Sant
A parabolic film by Gus Van Sant that toys with the mysteries of identity, fate, and the harsh realities of wilderness experiences.

Gus Van Sant has a special place in his heart for the idiosyncrasies of human beings as they work out their destinies in concert with others. Recall the colorful characters in Good Will Hunting? Remember the mutuality of teacher and student in Finding Forrester? In this minimalist drama, which was shot in Argentina, California's Death Valley, and the salt flats around Salt Lake City, the writer/director has fashioned an enigmatic drama that centers around two young men both called Gerry. Right from the start, we know that we are in parabolic territory similar to Samuel Beckett's Waiting for Godot. Of course, the times have changed and demand a different spin.

Two passengers (Casey Affleck and Matt Damon) in a car driving on an lonely stretch of highway don't have much to say to each other. They're buddies but each seems to be wrapped up in his own small world. They park the car and start to hike along a wilderness trail. But instead of following the tourist path, they decide to take another route to the "thing" they want to see at the end of the trail. That's a mistake. In the dry scrub brush landscape, they are soon lost. Trying to retrace their steps, they begin to go around in circles until they have no idea where they are.

Typical of the bravado of young men who see themselves as invincible, they have no backpacks or water. In one extended scene, Affleck gets stranded on top of a 20-foot high boulder. The two discuss how to safely get him down. Damon creates a "dirt mattress," and Affleck jumps down, fortunately without breaking his leg or ankle. They make it through the first night by a fire. But the tension of the predicament begins to wear on them the next day. Affleck is convinced that he knows the right way out. Damon doesn't trust him, especially after he starts having hallucinations. Dehydration sets in as both men show definite signs of fear about their imminent death.

Gus Van Zant has kept this parable about identity, fate, and the harsh realities of wilderness experiences very open-ended. You could see it merely as a meditation on the thoughtlessness of people who must pay the consequences for not having the proper respect for the realities of harsh environment. The drama can also be interpreted as a psychological riff on the way all of us struggle to dispense with the weaker and less appealing sides of ourselves. Or feel free to construct your own take on the men, the place, and their inevitable confrontation with death. Gerry is recommended only for the most adventuresome filmgoers since this minimalist drama demands great patience. 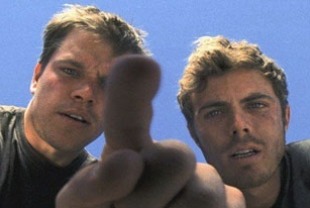 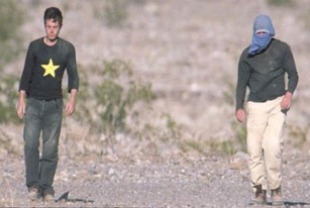