Directed by Steven Spielberg
A stirring film, based on Alice Walker's novel, about a black woman who endures incredible oppression until she finally learns to stand up for herself.

This stirring 1985 film is based on Alice Walker's 1982 novel which won the Pulitzer Prize for Fiction. The drama adapted for the screen by Menno Meyjes is set in the South and covers 40 years in the life of a black woman who endures incredible oppression at the hands of the men in her life until she finally learns to stand up for herself and acknowledge her special gifts. The Color Purple is given astonishing dramatic intensity and imaginative imagery by director Steven Spielberg. Top-drawer performances are put in by a versatile cast including Whoopi Goldberg, Danny Glover, Oprah Winfrey, Adolph Caesar, Rae Dawn Chong, Akosua Busia, and Willard Pugh. Filmed in lovely locations in North Carolina, the drama is greatly enhanced by the soulful music of Quincy Jones.

At 14, Celie is raped by the man she calls "Pa." Over the years, she bears him two children, both of whom are taken away at birth. Since her mother is dead, the only one in the world she can reach out to is her younger sister Nettie. Their close relationship is severed when Celie (Whoopi Goldberg) is forced into a marriage with Albert (Danny Glover), a widower with four small children.

Alone, friendless and terrified of this man whom she calls "Mister," Celie talks to God and lives day by day. The only brightness in her life comes when Nettie (Akosua Busia) arrives seeking sanctuary from "Pa." She teaches her older sister to read but eventually arouses Albert's lust. When Nettie refuses his advances, he kicks her off the farm. Nettie promises to write, vowing that only death can separate the sisters. Celie sinks into passivity and hopelessness. No letters arrive.

Just when Celie feels most abandoned, two friends appear in her life. Sofia (Oprah Winfrey) marries Albert's son Harpo (Willard E. Pugh). She's a boisterous woman who seems to dominate her meek husband. Celie has deep respect for this woman who has fought for her rights all her life. Even more surprising, when Celie gets ill, Albert brings Shug Avery (Margaret Avery) to the house. This vivacious blues singer, who has been his mistress for years, is immediately taken with Celie. At a nearby juke joint, Shug sings a song to her new friend titled "Miss Celie's Blues," urging her to "think you're something." Later that evening, the singer introduces Celie to the pleasures of the flesh, an experience she's never known in her loveless marriage.

As the years pass, Celie keeps longing for a letter from her sister. Then one day, Shug, who has married, discovers a missive from Nettie. She's in Africa serving as an apprentice with the missionary couple who adopted Celie's two children. Celie and Shug search the house and find other letters from Nettie hidden under the closet floorboard. Celie realizes that for years Albert has withheld the letters, until she thought her beloved sister was dead. At a dinner party, all the years of repressed anger explode in a tirade against the man who has abused her body, mind, and soul. She leaves Albert and takes over a family farm left to her by her real father. She starts a clothing store and is encircled by the humor and the heroism of her female friends. And then, through a surprise which can only be called grace, Celie's ultimate dream is fulfilled.

In an interview about The Color Purple, filmmaker Steven Spielberg said, "I want the audience to feel every color in Celie's rainbow, the rainbow she makes for herself and dives into head first." This poignant drama holds up the values of long-lasting love, perseverance, dignity and keeping on in the face of suffering, pain and loss.

This two-disc DVD special edition of The Color Purple contains four bonus features: A Collaboration of Spirits (casting and acting); Conversations with the Ancestors (the journey from book to screen); Cultivating a Classic (The making of The Color Purple); and The Color Purple: The Musical (the role of the music in the movie). 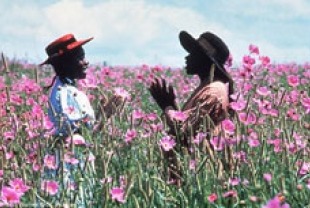 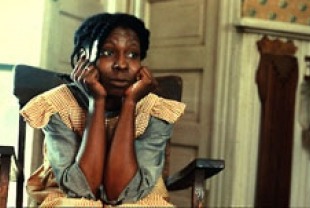 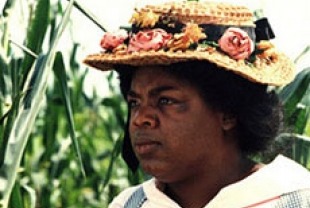 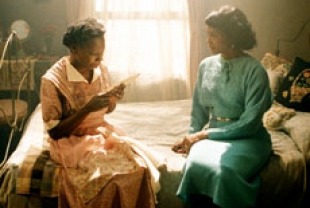