Directed by Bahman Ghobadi
The adventures of an elderly Kurdish musician and his two grown sons on a mission of mercy in Iraq's danger zones and refugee camps.

One is never too old for a mission of mercy. Mizra (Shahab Ebrahimi) is a renowned musician among the Kurds of Iraq. Now quite elderly, he has two sons, Barat (Faegh Mohammadi), a singer, and Audeh (Allah-Morad Rashtian), a musician with seven wives and eleven daughters. When word reaches Mirza that Hanareh, his ex-wife who left him to marry Seyed, another musician in their band, has called for him, he is determined to find her. His sons are reluctant to join him on this dangerous journey that will take them far from home but they reluctantly accede to their father's wishes.

In a Kurdish refugee camp filled with poor and fearful people fleeing the bombs and chemical weapons of Saddam Hussein's military, Miza locates Seyed's mother. She is supposed to have a letter from her son giving Hanareh's whereabouts. The musician looks on with sadness as this frazzled woman searches her clothing and meager possessions for the missive and can't find it. Meanwhile, planes fly overhead and the sounds of bombs are heard in the distance.

Miza and his sons locate Mollah Ghader, a matchmaker who is supposed to know where Hanareh is, but he is being punished by a local thug who is upset that the woman he wants is soon to marry another man. After burying Mollah Ghader up to his neck in the ground, this warlord takes the musicians to the wedding and forces them to perform. During a break, Barat hears a woman with a beautiful voice singing. Swept away by the moment, he proposes marriage, and she asks him to be her teacher. When he replies with a conservative and chauvinist answer, she wanders off.

Miza and his sons hit the road again, still not knowing where to look for Hanareh. They are attacked by thieves who steal Barat's motorcycle and his gold teeth. Audeh laments the folly of being lost in the wilderness with no money, transportation, or instruments. At a free-floating bazaar, Baran comes across his bike but there is no way to prove it is his. Two policemen who have also been robbed show up in their underwear. Later, a greedy entrepreneur who has been taking advantage of the refugees falls prey to the same robbers.

Kurdish-Iranian filmmaker Bahman Ghobadi (A Time For Drunken Horses) has made an immensely touching and compassionate film about the harassed and persecuted Kurdish people fleeing from Iraq towards the Iranian border. They are the largest ethnic group in the world without their own country. Their state of flux is beautifully mirrored in this quest story. They have a culture — the musicians are recognized and saluted wherever they go — but no home; the people have to keep moving to be safe.

In two of the most emotionally compelling scenes in the drama, Miza and his sons come upon an itinerant schoolteacher (Saeed Mohammadi playing the same character who appeared in the Iranian film Blackboards) who is trying to explain to his students what airplanes and bombs are. Later, they go into a camp filled with hundreds of orphaned children whose parents were killed, and then to a place where women are trying to recover the remains of their husbands, brothers, and sons. Many of the women have been disfigured by Saddam Hussein's chemical weapons.

As Miza wanders through these hellish environments with Baran and Audeh, each of his sons miraculously finds what they need to comfort their souls. And the long-suffering and good-hearted musician at last picks up the treasure that his ex-wife wanted him to receive with gladness. 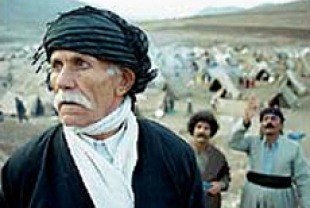