Directed by Karen Moncrieff
A beautifully crafted and well-acted drama about the tug and pull of yearning in the lives of a tormented young eighteen-year-old poet and her high school English teacher.

Eighteen-year old Meg (Agnes Bruckner) and her troubled younger sister Lily (Regan Arnold), who live in Ohio, are deeply scarred by their parents' divorce, which was marked by their father fleeing in a blue car. Their mother, Diane (Margaret Colin), is so obsessed with putting food on the table and getting a better paying job that she ignores both daughters. Meg is not able to cope with her sister's self-mutilation and starvation fasts. At one point Lily paints a mask on her face and says, "I don't look like anyone, even myself." Meg resents her mother for forcing her to be a caretaker for someone else at a very important time in her own life when she needs to be exploring the world and expressing herself.

After she writes a poem about the departure of her father in his blue car, Meg catches the eye of Mr. Auster (David Strathairn), who teaches English at her high school. She is flattered when he gives her special attention as her coach for an upcoming poetry contest. She is also impressed with the fact that he has been working on a novel for ten years. In one session during lunch-hour, Mr. Auster tells Meg that she is very talented and should stick to her poetry no matter what anyone says. Their work together pays off when she wins the contest and is qualified to compete in the national finals in Florida.

However, at home things go from bad to worse. Lily moves from self-mutilation to not eating. She collapses in a church after proclaiming herself an angel. Meg visits her sister in the hospital and later learns that she has been transferred to a psychiatric ward. Unwilling to ask her mother for the money she needs for Florida, Meg steals some ties from the store where she works and is eventually caught. Then her best friend's law-breaking brother promises to drive her to Florida but flees his parole. When Diane finds out about her daughter's transgressions, she calls her an ungrateful brat. This only makes Meg more determined than ever to find a way to Florida so she can read her poem, the truest thing she has created in her tangled adolescent life.

First-time writer and director Karen Moncrieff has fashioned a thoroughly engaging drama about a young woman's troubled journey to adulthood. More than anything else in the world, Meg is seeking a father who will love and respect her. She finds a surrogate one in Mr. Auster, who is impressed with her imagination and attentive to her feelings. When she needs a safe harbor in a sea of troubles, he is there for her. Of course, he has his own heartache and problems to cope with as Meg discovers when she meets his unhappy wife (Francis Fischer).

One of the marvels of Blue Car is the riveting performances given by Agnes Bruckner and David Straithairn. They manage to create sensitive, struggling, and vulnerable characters who are very credible as they follow the rush of their desires. Another marvel is the emotionally literate screenplay by Karen Moncrieff. As Mr. Auster reminds Meg, "A whole world emerges from little details."

There is so much yearning in the moment when Meg puts white paper over her teeth to make them whiter or when Mr. Auster looks into her eyes and sees the ardent soul he once was. There is so much pain on the Diane's face at a meal when she turns away from Lily's bowed head or when Mr. Auster's wife meets Meg and realizes that her husband is caught up again in another beautiful young woman's dreams. Blue Car is one of the best films of the year with its multidimensional exploration of the tug and pull of yearning. 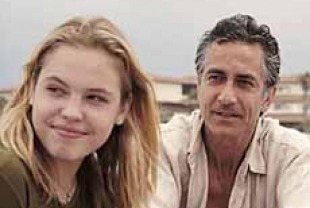