Directed by Cedric Klapisch
A captivating French film about an industrious young man's experiences abroad in Barcelona and his recognition of his various selves and his unity with others.

Xavier (Romain Duris) is an ambitious 25-year-old economics student who is promised a cushy job by a French ministry associate if he learns Spanish and can pick up a working knowledge of Spain's economy. Although he desperately wants to get away from his hippy mother, he is terribly upset about leaving his girlfriend, Martine (Audrey Tautou), for a year. Getting the paperwork done to be part of the European exchange program called Erasmus turns out to be a nightmare of red tape. When his plane finally takes off, Xavier is overcome by submerged feelings of anxiety about the change in his life and a journey into the unknown.

In Barcelona, he is immediately befriended by a French neurosurgeon and his lovely wife, Anne-Sophie (Judith Godreche). They let him sleep on their couch while he tries to find an apartment. One day the doctor asks Xavier to take his wife out sightseeing since she has so little to do. They hit it off and form a friendship. However, Xavier is most excited when he is accepted into a place shared by three male students from Germany, Italy, and Denmark, and two women from England and Andalusia. They are filled with an exuberance for life and love to mix studying with dating and partying. The refrigerator is stuffed and overflowing with beverages and foods from many countries, a veritable mirror of the experiment of the European Union.

A visit from Martine turns into a disaster when she dislikes the students and feels uneasy about having sex when they are in the next room. Isabelle (Cecile Defrance) is accepted by the group as a new housemate, and she shares a room with Xavier. When he learns that she is a lesbian, their friendship deepens. She teaches him the romantic touches and moves that are the most erotic to women. He tries them out on Anne-Sophie after she allows herself to be seduced by him. Meanwhile, the English woman's brother (Kevin Bishop) arrives for a stay with her and manages to turn off all the members of the household with his ethnic slurs. He does prove to be very loyal to his sister when he manages to cover up her affair with an American so that her just arrived boyfriend isn't offended.

L'Auberge Espagnole is another innovative and captivating film by French writer and director Cedric Klapisch whose 1996 When the Cat's Away did a marvelous job capturing a slice of authentic life in a French neighborhood in Paris. This comedy has the same delight in urban life and all the ways in which it stimulates the mind, body, and soul. Xavier's deluge of experiences in Barcelona feed not only his libido but his creative spirit. He finds himself opening up to a diverse group of people and sympathizing with their triumphs and difficulties. He remembers that as a little boy he wanted to be a writer. In Barcelona he gets to play many other roles as he goes with the flow of the moment or the person he's with at the time. His cross-cultural experience helps him recognize all his various selves and his unity with others. L'Auberge Espagnole is a buoyant romp from the opening scenes to the closing credits. 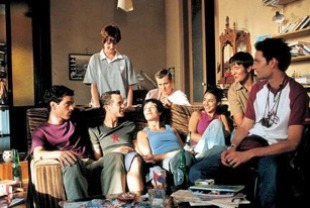