Directed by Tom Shadyac
A cinematic parable about a selfish and obsessed television reporter whose spiritual journey opens his heart and sets him on a path of using his gifts to serve others.

Jim Carrey is one of the most popular screen comedians around with his incredible energy and outrageous physical stunts. He teamed up with director Tom Shadyac for Ace Ventura: Pet Detective and Liar, Liar, both box-office hits. Now they are working together again in Bruce Almighty, a comedy that revolves around a handful of universal spiritual questions regarding God, human nature, power, love, miracles, and opening the heart.

Let's get one thing clear at the outset: It is very difficult in these contentious times to ponder any of these subjects without the softener of humor. Once over lightly is the way to go. Even when movie-makers travel this route, many critics still look down on movies like Bruce Almighty as being shallow and mawkish. But those who are spiritually literate are able to see that the Mysterious One often lurks in the trivial. Or to put it another way, here are the words of Arthur Asa Berger: "What pop culturists recognize, and the implications of this insight are profound, is that when you can read all things not only in a cathedral or a grain of sand, but also in a meatball, you are on the path toward understanding humanity and society." So let's take a look at this cinematic meatball.

Bruce Nolan (Jim Carrey) is a television reporter in Buffalo, New York, whose specialty is human interest stories rendered with a dash of humor — like a feature on the city’s largest cookie created by a local bakery. While everyone views Bruce as a playful spirit, underneath this facade lurks a very angry man with a desperate desire to be an anchor person on the evening news. Grace (Jennifer Aniston), his live-in lover of five years, knows about this yearning and is unable to get him to focus on their future together. She is a spiritual person who believes everything happens for a reason. She runs a daycare center and stays connected with others through prayer and service. She also treasures their relationship and is happily putting together a photograph album of their time together. Needless to say, Bruce has little interest in reveries about the past. His greedy eyes are fixed on the prize which he thinks only he deserves.

During sweeps week, Bruce gets a chance to do a live report from Niagara Falls about the anniversary celebration of the Maid of the Mist boat. However, just before he goes live, he learns that his rival, Evan Baxter (Steven Carell), has been chosen to replace the retiring anchor on the evening news. Bruce freezes and then launches into a tirade, verbally abusing an elderly woman and the tour owner he was about to interview. Later, fired from the station, he tries to help a homeless man who is being given a hard time by a rowdy street gang. But they beat him up and then damage his car. At home, he finds his favorite sports team is still losing, and his dog insists on peeing on the furniture. Grace can't get through to him in his cage of rage. "God is a mean kid sitting on an anthill with a magnifying glass and I'm the ant he’s pulling the legs off,” whines Bruce. God is ignoring him, he continues: “He could fix my life in five minutes if he wanted to.” Assuming the role of the critic, he addresses the heavens and gives God a thumbs-down: “The only one around here not doing his job is you!"

Bruce Almighty, like the two Oh, God! movies presents a playful encounter between God and one of his creations. Bruce is summoned to an abandoned building, home of Omni Presents, Inc. where he sees a janitor (Morgan Freeman) mopping the floor. Upstairs he meets the same man, this time changing a light bulb. He explains that many people find it uncomfortably bright and spend their days turning away from it. Yes, the janitor changes clothes and reveals himself to be God. He’s heard Bruce’s complaints and has decided to let him try being God for a week and see if he can do any better. This one-time arrangement, confined to the Buffalo area, contains only two rules: he can't tell anyone about it, and he can't mess with anyone's free will.

The first thing to say about Bruce Almighty is that Morgan Freeman makes a mighty appealing God. He is playful and has a good sense of humor to go along with his omniscience and omnipotence. He believes in human beings and cheers them on when they do good things like stepping aside and letting others go first.

Another theme that works quite well is Bruce’s use of the divine power bestowed on him. At first, it is a toy that enables him to clear a path in the traffic for his new sports car and get his dog to use the toilet. Then he turns to more serious things, reaping revenge on the ruffians who assaulted him. Power can make us into brutes and draw out our most vile instincts. In a hilarious scene, Bruce uses his ability to literally put words in someone’s mouth to humiliate his rival at the television station. There is a great tide of energy in revenge.

Soon Bruce is using his divine advantage on the job and gains the nickname “Mr. Exclusive.” But he doesn’t know what to do about all the noises in his head — the prayers of millions turning to him for help and praising his name. Lacking the patience that is part of divine love, he comes up with a quick and casual solution that results in a riot in the streets of Buffalo.

The relationship between Bruce and Grace is shaken up, to put it mildly, by his new divine powers. On the night she expects him to propose marriage, he disappoints her with something completely different. Bruce is another love-challenged male who is oblivious to the impact his actions have upon others. For example, when he pulls down the moon to bring it closer to Grace for a romantic evening, the result in Japan is a tidal wave.

In his first meeting with God, Bruce tests him with the how many fingers am I extending behind my back trick. His initial use of his divine power is a parting of the Red Sea bit with some tomato soup in a bowl. But Bruce is so caught up in these and other feats that he misses the miracles right in front of him. Such as the loving devotion of Grace. Such as the face of God in his rival at the television station. Such as the messages of a disheveled homeless person who is beaming signs of truth to everyone who passes him. "Be a miracle," God tells Bruce, and what good spiritual advice that is. We've heard it a hundred times but how hard it is to live it!

It’s not easy being God, Bruce learns. The second rule, that he must allow others to act out of their own free will, becomes a real challenge. Grace won’t just do what he wants, and there is no way he can force her to love him. “Welcome to my world,” God sympathizes.

Last but not least, Bruce Almighty is about the grace that abounds in our lives when we open our hearts. The dramatic arc of this often over-the-top comedy moves through the protagonist's selfishness and his toxic use of power, to his questioning and realization of what is really important to him, to his movement into a selfless way of living. Not bad for a cinematic meatball! Let's close with the words of the poet Rainer Maria Rilke: "Work of the eyes is done. Now go and do heart work." 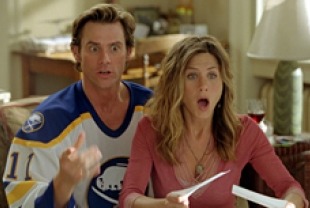