Directed by Chen Kaige
A vibrant and touching Chinese film that tugs at the heart and convincingly conveys the challenges faced by a teenage musical prodigy from the provinces after he arrives in Beijing.

Xiaochun (Tang Yun) is a thirteen-year-old violin prodigy who has been raised by his father, Liu Cheng (Liu Peiqi), a cook in a small Chinese city. Music is the boy's life, and it shows in his advanced artistry. He plays from the heart and loves performing.

Liu Cheng is very proud of Xiaochun and decides to take him to Beijing to further his studies. The two of them arrive in the city and are unprepared for the shock of the immensity of it all. Xiaochun gets separated from his father and is immediately mesmerized by a pretty woman saying goodbye to her boyfriend. She offers him a few coins to take her bags, and Xiaochun obliges gladly just to be close to her. Then, before, he knows it, she is gone.

Xiaochun and his father are reunited and at his first competition to gain entry to a prestigious musical school, the talented violinist places fifth. Liu Cheng, who has a knack for being at the right place at the right time, overhears Professor Jiang (Wang Zhiwen) say that Xiaochun played the best but the prizes went to those who had the most money. This reclusive and idiosyncratic teacher agrees, after much badgering by Liu Cheng, to take the boy on as a student. Xiaochun is told to work hard and to enjoy the music he plays. Although the boy respects his teacher, he is bothered by the crummy house he lives in with a group of stray cats.

Meanwhile, Xiaochun and his father must sleep at the baths when they run out of money. The unflappable peasant is not afraid of hard work and lands a job as a food delivery boy. Xiachun is ecstatic when he discovers that the beauty he helped at the station lives in his neighborhood. Lili (Chen Hong) is his dream woman, and he succumbs to an adolescent infatuation with her. She lives a rather precarious existence relying on the affections and wealth of older men. Her apartment bears all the signs of a person caught up in Western decadence with her cell phone, movie posters, and designer clothes. Lili and Xiaochun become good friends and he is on hand to help her make it through several romantic disappointments. She senses his great musical talent and is honored whenever he plays the violin for her. But Xiaochun's infatuation with her leads to a crisis that threatens his musical career.

Chinese filmmaker Chen Kaige is best known for Farewell My Concubine, Temptress Moon, and The Emperor and The Assassin. He has made an appealing movie that works well on many levels — as a portrait of the coming-of-age of a talented boy from the provinces, as a father-son drama filled with interesting twists, and as an exploration of creativity and the role of a gifted musical genius. The film is propelled forward by a stunning classical music soundtrack. The violin sequences in Together are played by Li Chuanyun.

The real tension in the story kicks into gear when Liu Cheng stumbles into a Beijing concert hall and watches a violin prodigy trained by Professor Yu (played by director Chen Kaige) win the acclaim of the audience. This is the one who can make his son into an international star. He decides that it is time to switch teachers. Xiaochun has other things on his mind and the first meeting with Yu is awkward for everyone. The boy has a bittersweet farewell with Professor Jiang and then as his work with Yu begins, he faces a talented female competitor who has her gaze set on the prize of fame.

Together convincingly conveys the challenges that Xiaochun faces to remain true to his artistic gift. But even more important, it explores the emotional ties between father and son in some primal scenes where the two must square off against a long-held secret that is brought out into the light. 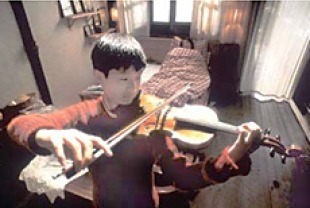