Directed by Niki Caro
An enchanting and ultimately enthralling New Zealand movie about the struggle of one ardent and determined young Maori girl to fulfill her destiny.

Koro (Rawiri Paratene) is the chief of the Ngati Kanoahi tribe of Whangara. They reside in a coastal fishing village in New Zealand. Times are hard for these people who can barely scratch out a living. Koro is extremely disappointed that Porourangi (Cliff Curtis) has no interest in becoming the next chief. However, when his son's wife becomes pregnant, Koro begins to hope the male he seeks to lead the people will be born. Unfortunately, the boy and his mother die in childbirth. However, a twin sister survives, and Porourangi names her Paikea after the tribe's venerated ancestor who is said to have arrived in their village on the back of a whale after his canoe capsized. Koro is furious that his son has given the infant this sacred name traditionally reserved for a male child; he shortens the name to "Pai." The grieving Porourangi, an artist, decides to go to Europe and so he leaves his daughter with his parents.

Pai (Keisha Castle-Hughes) grows up knowing of her grandfather's disappointment that she is not a boy. Despite that barrier between them, they do bond and by the time she is 12 years old, he is picking her up every day from school on his bicycle. Nanny Flowers (Vicky Haughton) has a special place in her heart for Pai and gives her the moral support she needs. When Porourangi returns home on a visit from Germany where he works as a sculptor, it is clearer than ever that he has no intention of accepting his destiny and becoming Koro's successor. Porouangi offers to take Pai back with him but she chooses to stay in New Zealand.

Koro rounds up all the 12-year-old boys in the Whangara community and begins passing on the ancient chants, tribal lore, and warrior techniques to them. He is convinced that the future chief will emerge from the group and establish himself as the chosen one. Koro is enraged when he finds out that the determined Pai has been listening in on his lessons and taking private instruction on stick battle from Koro's other son. She is forbidden to continue in this training. Koro is heartbroken when he throws his whale bone into the ocean and not one of the boys manages to retrieve it. But Pai has several surprises for her tradition-bound grandfather that will open his eyes and the rest of the tribe to her true destiny.

This enchanting and beautifully acted New Zealand film is written and directed by Niki Caro based on a 1986 novel by Witi Ihimaera. The deeply spiritual message of the drama is that Pai must pursue her destiny as a leader in face of the powerful patriarchal tradition espoused by Koro, who is inflexible in his attitudes toward women. The arduous struggle of this determined girl to find her true place among her people is one that will resonate with women around the world. The extraordinary performance by Keisha Castle-Hughes richly conveys the conflicting emotions Pai feels in her turbulent relationship with her grandfather. Zeal is a commendable attribute in pursuit of a calling from the spirit world, and Pai uses solitude, silence, and prayer as practices to keep her in touch with her ancestors and the whales that play a major role in the dramatically rich final segments of the film.

The DVD includes a director's commentary by Niki Caro, the trailer and TV spots, a few deleted scenes, an art and photo gallery, plus several very interesting features — "Behind the Scenes of Whale Rider," a 30-minute featurette with the cast and crew; "Te Waka: Building the Canoe," about the intricately carved canoe used in the last scene of the film; and a showcase about the score. 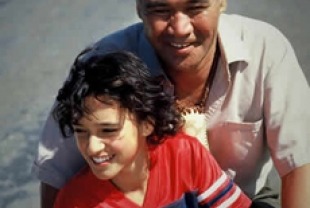 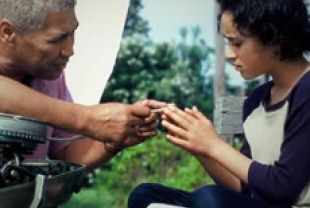