Directed by Tim McCanlies
An extraordinary coming-of-age movie that salutes the odd ways eccentric individuals can inspire us to become all we are meant to be.

Our lives are immeasurably enriched by larger-than-life eccentrics who seem to burn more brightly than the rest of us. They stand before us with stories that take us in and spin us around. They amaze us with antics that continually surprise us. They engender within us a fresh appreciation for the deep mysteries of the human personality. They stretch us with all the wild possibilities inherent in every situation, no matter how small or seemingly inconsequential. When we are in their presence, we feel that anything is possible, and that life is an adventure that deserves our intense participation.

Walter (Haley Joel Osment) is a quiet and serious boy whose single mother (Kyra Sedgwick) drops him off for an unannounced visit with his two great-uncles, Garth (Michael Caine) and Hub (Robert Duvall), on their ramshackle ranch. She's off to court-reporting school in an effort to find a career that will support them, but she also tells Walter to try to find the millions of dollars his uncles are supposed to have hidden away somewhere. It's the 1960s, and gossip in the Texas community claims their fortune must have come from bank robberies or money stolen from Al Capone. No one knows for sure, and the two eccentric old men refuse to reveal anything. Garth's nephew (Michael O'Neill), his wife (Deirdre O'Connell), and their children have been trying to ingratiate themselves with him to no avail. He sees their greed for inheritance gathering to a greatness behind all their smiles.

At first, Walter is in a funk at being dumped with these two recluses who don't even have a television. But slowly, the boy begins to get caught up in their exuberance. They really are quite colorful characters. One of their amusements is scaring off traveling salesman who stop by to show off their wares. They fire gunshots over the heads of these hustlers and watch them flee in their cars. Occasionally, they do buy something. Although they have no experience in such matters, they buy a bunch of vegetable seed packets, and Walter helps Garth plant a garden. The old men, who claim to have spent their early years in Africa, also purchase a lion from a circus which they intent to hunt on their land in a mini-safari. The animal, however, is hardly fair game. He's old and lazy and mistakes the corn patch for the jungle. They give him to Walter, who revels in the chance to take care of him.

While looking through a trunk in the attic where he sleeps, Walter comes upon the picture of a beautiful woman. This feeds his interest in learning more about his uncles' past. Garth responds to his questions with a series of stories about their incredible adventures overseas in faraway places. At the heart of it all is Hub's love for an African Princess, Jasmine (Emmanuelle Vaugier), his exploits in the Foreign Legion, and his repeated encounters with an intense sheik (Adam Ozturk). Meanwhile, in several touching scenes, Hub shares with Walter his feelings about things worth believing in.

While Garth seems to accept his descent into old age, Hub rages against the changes in his body and the loss of his vigor. Several key scenes show him mellowing a bit in the face of his physical decline. Walter's new self-confidence shows when his mother returns with a malevolent boyfriend (Nicky Katt). By now, the boy has bonded with both his uncles. As they all face new challenges, Walter realizes that he must become the hero of his own life.

Secondhand Lions was written and directed by Tim McCanlies (Dancer, Texas, Pop. 81), who also wrote the screenplay for Iron Giant. The dream cast of Haley Joel Osment, Michael Caine, and Robert Duvull ably convey the subtle yet significant changes in their characters. This is one of those stories where it doesn't really matter how much of the goings on really could have happened, because it is all true. Secondhand Lions is an extraordinary coming-of-age movie that salutes the odd ways in which eccentric individuals can inspire us to turn our lives around and become all we are meant to be. 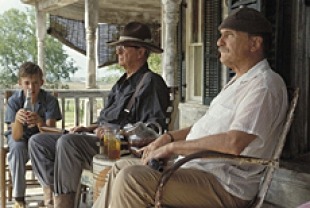