Under the Tuscan Sun

Directed by Audrey Wells
A tonic for those who believe that special places can nourish and nurture us, setting the stage for our spiritual transformation, even after the worst heartbreak.

Frances (Diane Lane) is a San Francisco writer and book reviewer whose life is upended when she learns that her husband has been having an affair with another woman. After the divorce and a settlement that gives him the house, she moves into a depressing apartment building that specializes in short-term leases for divorced people. Frances can't even concentrate on her work, thanks to the sobbing of a man on the other side of the paper-thin walls. Her best friend Patti (Sandra Oh) is in a gay relationship and pregnant. That is why she and her lover want Frances to take the ten-day trip they have booked to Tuscany. When she complains that she is no state to have to fend off men, they assure her that won’t happen on the "Gay and Away" tour. Patti insists that Frances needs to get out of her rut or she risks becoming one of those individuals who never recovers from heartbreak.

While Frances is with the group touring Cortena, she is mysteriously drawn to a real estate ad for a villa named Bramasole, which means "something that yearns for the sun." Later, the bus stops right in front of this 300-year-old villa with groves of olive trees. Frances jumps off the bus and wanders inside where Mr. Martini (Vincent Riotta), the realtor, is negotiating a price between a couple and the owner. Fate intervenes, and the owner decides to sell the villa to Frances.

Not sure exactly why she is doing this, Frances is soon involved in restoring the old stone house and its badly damaged garden. She hires a contractor who has three men from Poland working for him. Mr. Martini is always available to help her with translation problems and practical matters. She also becomes friends with Katherine (Lindsay Duncan), a middle-aged Englishwoman who starred in a film by Federico Fellini when she was 16. She is a free spirit and hedonist with a penchant for fancy hats and ice cream cones. Whenever Frances falls into a funk, Katherine tells her to stop "wallowing." She admonishes her to live "spherically" by living life full tilt. Of all the movies she’s seen, Katherine’s favorite is Fellini’s Nights of Cabiria where a lover who is betrayed and left with nothing still finds the inner resiliency to start afresh after seeing some children at play. Katherine tells Frances: "No matter what happens, always keep your childish innocence. It’s the most important thing."

While on an antique-hunting expedition in Rome, Frances meets Marcello (Raoul Bova) who takes her to Positano where he owns a beach restaurant. They fall into each other’s arms and soon she's wondering if he is to be the new love of her life. Earlier in a moment of frustration over the renovations, she shared a dream with Mr. Martini. She wants someone to cook for, she wants to have a wedding at the villa, and she wants to have children growing up there. As so often happens with dreams, it doesn't quite turn out the way she expected it to.

Under the Tuscan Sun is based on the book of the same title by Frances Mayes and has been written and directed by Audrey Wells. It is about the patience, courage and resilience it takes after having your heart broken to embrace the unknown, to have faith in yourself, to nourish hope for the future, and to be open to the possibilities for new life as they slowly unfold around you in places and people you have overlooked. Those who have followed Diane Lane’s career since her marvelous debut in A Little Romance through her recent triumphs in A Walk on the Moon and Unfaithful will rejoice in the subtleties and emotional nuances she brings to her multileveled performance as Frances. 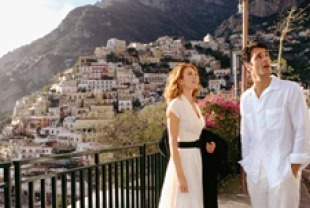