Assistant District Attorney Nicole "Nick" DeCivo (Parker Posey) is investigating the death of Matt Shapiro (Don McKellar), a young man whose suicide looks suspicious. His body was cremated very quickly, and his family and friends are not being very forthright about the circumstances surrounding his last hours. After interviewing Brian (Brent Carver), head of the Chelsea district of New York City's HIV support clinic and Matt's caregiver and lover, Nick comes to the conclusion that he might have been involved with an assisted suicide, which is against the law. Her interviews with Matt's older sister Gaby (Joanna P. Adler), his younger sister Dana (Sarah Polley), and his mother Lila (Olympia Dukakis) only confirm what she believes may have happened — some kind of farewell party ending with his death by a drug overdose.

In a series of flashbacks, we see what really went on the night of Matt's death and some of the major events leading up to it. At a meeting with his doctor, Matt is told that he has very little time to live. He tells his upper-middle class mother, and she is devastated. In one of the most touching and honest scenes in the drama, she bathes her son as he lies prone in the bed, unable to muster the energy to lift his arms when she slips on his t-shirt. Her care and the nurturing love surround Matt like a circle of light. His lover Brian does his best to be supportive but is very burnt out working with AIDS patients under his watch at the hospice.

Matt finally organizes a special, by-invitation-only event where he can say goodbye to his family and friends. Meanwhile, Nick looks closer into her own father's death and learns a few things that shock and stun her. The law with its simplistic black-and-white approach to the complications of life-and-death issues misses the mark by a mile.

Olympia Dukakis's stirring performance gives this AIDS drama its emotional clout. Thom Fitzgerald provides very sensitive and able direction of The Event, which is based on a screenplay he co-wrote with Tim Marback and Steven Hillyer. 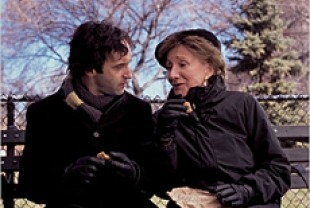