Directed by Rithy Panh
A chilling documentary that compels us to consider the terrible things human beings can do to one another because of fear, ideology, or just following orders.

While the world focused its attention on the war in Vietnam in the late 1970s, Cambodia was being subjected to a reign of terror in which an estimated 1.7 million people were killed, nearly 21 percent of the country's population. Some have called the Khmer Rouge regime the most vicious since the Nazi occupation of Poland. The 1984 feature film The Killing Fields dealt with many of the atrocities committed by these Communist revolutionaries but to this day there has been no trial of Khmer Rouge leaders. That is one of the reasons Cambodian-born director Rithy Panh has made this grim and sober-minded documentary. He was sent to a labor camp with thousands of others when he was 11 years old. He escaped four years later. The filmmaker has stated in an interview: "After a war, either you keep silent yourselves, or you try to reconstitute what is broken [within you]. Khmer Rouge is genocide without image, except photographs. Any remainder is printed in the conscience. What you saw and lived does not stop. It is this memory that brought me to the medium of cinema."

This documentary was filmed in the Tuol Sleng High School which the Khmer Rouge used as a detention center called S21 and is now a genocide museum. Between 1975 and 1977, nearly 17,000 people passed through its doors where they were interrogated, tortured, and executed. Vann Nath, one of only three survivors of the detention center, was a painter whose work found favor with his captors. He consoles another survivor who is unable to speak because of the grief that overcomes him in remembering the past. Nath then talks to a dozen former Khmer Rouge fighters who were prison guards, a doctor, and a photographer. Houy, the deputy head of security, Khan the torturer, and Thi who kept meticulous registers at S21 try to justify their deeds by saying they had no choice — if they disobeyed orders they would have been killed. Only one of their number shows any remorse. The others still seem quite at home uttering slogans about the enemies as animals or weeds that must be destroyed. The guards re-enact their routines and try to share some of their memories of the men, women, and children who died under their watch or at their hands.

Long ago, Aldous Huxley wrote: "Cruelty and compassion come with the chromosomes. All men are merciful and all are murderers. Doting on dogs, they build their Dachaus. Fire whole cities and fondle the orphans . . . Whom shall we persecute, for whom feel pity?" This gruesome documentary shows how ordinary people are able to do terrible things to others in obedience to authority. It also depicts the process whereby functionaries can kill others without blinking only after they have dehumanized them in their minds. Hopefully, S21: The Khmer Rouge Killing Machine will help director Rithy Panh achieve his goal of bringing the leaders who set both of these processes in motion to trial as war criminals.

The DVD's bonus features include a director interview; biography and filmography; Cambodia: A Chronology; HRW film notes; and a trailer gallery. 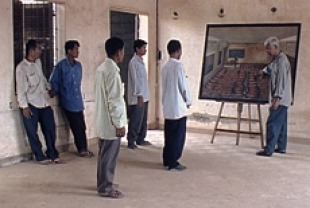