Directed by David Mackenzie
Vividly explores the sexual addiction of a young drifter whose seductions leave him unfulfilled and yearning for more.

Joe Taylor (Ewan McGregor), a drifter, has a job working on a barge on the canals between Glasgow and Edinburgh. It is run by Les Gault (Peter Mullan) and his wife Ella (Tilda Swinton), who have a young son (Jack McElhone). Joe is a compulsive womanizer who derives a great deal of pleasure and pride from being irresistible to women. He knows that the passion has gone out of his employers' marriage and so it is just a matter of time until he seduces Ella. She is awed by his knowingness and the ease with which he moves through the stages of her arousal. Of course, Joe has no interest in any long-term commitment to any woman. He doesn't seem to even like women very much. They remain sexual objects to him and the main avenue for expressing power in his amoral life. Once Les finds out about his wife's adultery, he leaves her. Ella's sister Gwen (Therese Bradley) comes for a visit and proves to be the same kind of sexual predator as Joe.

In the first scene in the film, Joe and Les pull a dead woman's body out of the river. She's nude underneath a petticoat. It turns out that her name was Cathie (Emily Mortimer), and she had a lengthy affair with Joe. In flashbacks, we witness their meeting at the beach. He says, "Would you like to come with a walk with me?" She asks, "Where to?" He answers, "Over there."

The seduction is short and sweet and soon she is dreaming of marriage, especially after discovering she is pregnant. In one scene, Joe's violence erupts after she criticizes him, and the sex he has with her is crude and mean. An innocent married man is charged with killing her and Joe, who knows the circumstances surrounding her death, tries to tell the truth without getting himself in trouble. Besides being good at seducing women, Joe has a knack for looking out for himself and never sharing anything with anyone.

Young Adam explores the sexual addiction of a young drifter whose seductions leave him unfulfilled and always yearning for more. Writer and director David Mackenzie has adapted the drama from an underground classic by Alexander Trocchi, a Scottish Beat writer of the 1950s.

The DVD has two audio commentaries, one with director David Mckenzie and another with Mackenzie, editor Colin Monie, production designer Laurence Dorman, and star Tilda Swinton. There is also one extended scene and some examples of Ewan McGregor's voice-over narration, which was not used in the final film. 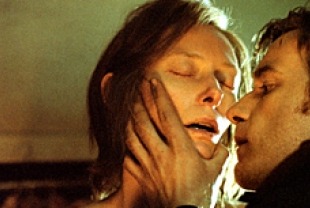