Directed by Jafar Panahi
A bold and courageous Iranian film by director Jafar Panahi about one sad human drama that is illustrative of the growing chasm between the rich and the poor in Teheran.

While the American film industry studiously avoids dramas about the growing gap between the rich and the poor, foreign filmmakers have at least made a stab at dealing with such inequities. This Iranian film is directed by Jafar Panahi (The White Balloon,The Circle) and written by Abbas Kiarostami. It offers a convincing portrait of contemporary urban Iran where harsh totalitarian measures are used against citizens and where the chasm between the haves and the have-nots is gigantic. The drama begins with the robbery of a jewelry store by two men. An alarm goes off and traps one of the men in the store with the rich owner. Then Crimson Gold backtracks to explore the lives of the two robbers and what led them to commit such a crime.

Hussein (Hossain Emadeddin) is a Tehran pizza delivery man who is on medication for injuries received in the war with Iraq. He is a tight-lipped and overweight fellow who is engaged to marry the sister of his best friend Ali (Kamyar Sheissi), an amateur purse-snatcher. In a restaurant, the two men examine the contents of a stolen handbag — a broken wedding ring and a receipt for an expensive necklace. A stranger overhears their conversation and proceeds to lecture them about professionalism among thieves, including the advice to not rob those who don't have anything but small change on them. He leaves them with the thought: "If you want to arrest a thief, you'll have to arrest the world." Hussein is irritated by the condescending attitude of this stranger.

Hussein and Ali decide to visit the upscale jewelry shop to find out more about the necklace, but the store owner won't let them in once he sees their clothing. Later, Hussein's general resentment over being treated poorly isn't helped by a run-in with the police who have surrounded a building where he is supposed to deliver a pizza. They won't let him go in or leave the area until they tell him to do so. He talks to a 15-year-old soldier who scorns those who are attending an illegal party and dancing with women. In his wretched apartment, Hussein hears the police take away a protesting neighbor without making any concrete charges against him.

The final straw comes when Hussein and Ali dress up in their suits and take his fiancée with them to the same jewelry store. Asking to see the owner, they are told he is unavailable. But when a rich couple arrive, he appears and takes care of them immediately. After they leave, he suggests that Hussein, his fiancée, and Ali go to the bazaar in the working-class neighborhood which will be more in line with what they can afford. Snubbed again, the war veteran bristles with anger.

Hussein takes three pizzas to a luxury apartment late at night. The rich young man who lives there complains that two young women just left and the pizza was for them. Feeling lonely, he invites Hussein into the duplex penthouse to eat the pizza with him. When he goes upstairs to wash his hands, the delivery man looks around and is stunned by the opulence of the place. The young man says that it belongs to his parents who like to visit the United States. When he goes off to talk to his girl friend on the phone, Hussein wanders around and finally finds himself in a room with a gigantic swimming pool. He plunges into the water and later, wrapped in towels, sits on the roof terrace overlooking the city of Tehran.

It is fascinating to watch how the small slights, snubs, and humiliations of urban living can accumulate and become a raging inferno of resentment and rage. To have one's freedom restricted by police and a repressive regime is no picnic either. By the time the circle is complete and we are following Hussein as he walks into the jewelry stone with a gun pointed at the back of the owner in the early morning, the filmmakers have given us an indication of what has driven this desperate and angry man to embark on his mission. Sadness enshrouds our hearts as we watch him make a final and definitive statement.

DVD features include interviews with cast and crew. 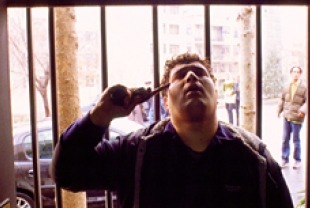