Directed by Peter Hedges
A complex story revolving around a Thanksgiving dinner that draws out our mixed feelings about families, nasty grievances, and moments of gratitude.

We think we have escaped home but we remain under the family spell. It often ambushes us on holidays when old images, feelings, fond moments, and grievances come back into our consciousness. We can never toss it out or hide it away in a closet. Family ties link us to the people who shaped us with their love and their anger and their slights. We keep track, and our feelings about them get larger the longer they are held inside.

That is what has happened to April Burns (Katie Holmes) who has never been close to her mother, Joy (Patricia Clarkson). It is Thanksgiving morning, and she has invited her whole family for a turkey dinner. Her boyfriend Bobby (Derek Luke) is enthusiastic about the chance to meet her parents, brother, and younger sister. But she is wishing that the day would vanish like a bad dream. Bobby shows her a salt and pepper shaker set he has purchased for the holiday, which is just like the one they had when April was growing up. She recalls the time her mother told her "Be careful, they're worth more than you are!" and angrily throws them in the wastebasket.

At the family suburban home, Jim (Oliver Platt) awakens but cannot find Joy anywhere. It turns out she is in the garage sitting in the car waiting for everyone else. Beth (Alison Pill) doesn't know why they are wasting their time going to dinner at her sister's since she got an "A" in home economics and can cook better than her. Timmy (John Gallagher, Jr.) has taken film to the car but forgotten the camera. They pick up Joy's senile mother, Dottie (Alice Drummond), from a nursing home; they are not even sure she knows who everybody is.

Jim is the only one who has even the slightest interest in going to April's. "We're going to have a nice time," he declares, almost willing it to come true. He reminds the others that April ditched her last boyfriend, who was a drug dealer, and now has a guy who sounds promising. But Joy is bound and determined to sabotage April's meal. She practically orders them to fill up on doughnuts.

Meanwhile, April is having a hard time believing what has happened to her. After Bobby goes out on an errand, she discovers that the stove doesn't work. She calls the super in their rundown Lower East Side apartment building but he is gone for the holidays. An African-American couple (Isiah Whitlock and Lillias White) listen to her tale of woe and come up with a compromise: they will put April's turkey in their oven for two hours but then she'll have to find another place. April is turned away by a man who has problems with his nasty mother but still wouldn't pass up the chance to be with her. A snooty vegan says she just couldn't stand knowing that something that had a face was cooking in her stove. Wayne (Sean Hayes) proudly shows April his new convection oven and lets her use it. But when she is not properly grateful, he kicks her out, and she is forced to rely upon a kindly Chinese family who can't speak English.

Pieces of April is written and directed by Peter Hedges who penned the screenplays for What's Eating Gilbert Grape and About a Boy. He is a master of character driven movies, and this one confirms that reputation. The people in Hedges' stories are full fledged human beings with discernible flaws and foibles as well as many laudable qualities. They are not caricatures or mere vessels for action sequences like those who fill so many popular Hollywood movies. We can care about them because we recognize them. How things turn out for them matters to us because we know what they are going through.

Here April is trying to do a good thing by inviting her mother and the rest of the family for a Thanksgiving meal. But everything goes wrong, and all the old demons rise to the surface in her mind as she recalls the pain she experienced in the family circle. Fortunately, Bobby and her neighbors help her stay centered.

Joy has her own cross to bear. She is dying of cancer and everyone knows that this may be her last holiday with them. But instead of being the kind, sweet, and soft-spoken woman Dottie remembers, Joy is boiling mad and filled with rage at the loss of her hair, the vomiting, and the constant pain. She can't recall anything but disappointments from April, not to mention her drug use and a fire in the kitchen. Trying to dredge up one positive memory of her, she blurts out that one morning when April was three years old and was gazing out the window, she said, "Oh, Mother, don't you just love every day?" But Beth corrects her; she said those words, not her sister. By now, it looks like they will never get to New York and the gathering is likely to be a disaster if they do.

While waiting for the turkey to cook, April shares the story of Thanksgiving with the Chinese family, who now have one of their number to translate. She points out that the holiday revealed to the early settlers in America that they needed each other and couldn't do things alone. As she says those words, we wonder whether Joy and April will be able to see each other for the first time in a long time. Will the old family spell that comes over people as they sit down together at a special meal work its magic? And can Thanksgiving itself fill the air with gratitude so that this family may be united and happy together at last?

The DVD has an audio commentary by writer/director Peter Hedges. He's also central to the making-of featurette, in which he talks about how the film is semi-autobiographical. 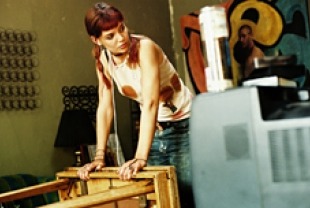