Directed by Robert Benton
Tallies up the pain, the suffering, and the loss that come into our lives when we refuse to acknowledge the shadow part of ourselves.

Coleman Silk (Anthony Hopkins) is the former dean of Athena College where he teaches classics. The year is 1989, and the media is obsessed with the Monica Lewinsky scandal. When Silk notices that two students are still missing from his class several weeks into the semester, he asks, "Do they exist or are they spooks?" The faculty gather and inform him that the two students are African Americans who were deeply offended by his racial slur. Silk, of course, argues that he was referring to a phantom or ghost since he'd never even seen the students. Shamed by the faculty, many of whom he hired, the professor flees to his home where he and his wife (Phyllis Newman) plan a campaign to clear his name of the racism charge. But she dies of a heart attack after a brilliant burst of invective. Silk retires, still nursing the resentment he feels for being a victim of political correctness.

When the former professor learns that Nathan Zuckerman (Gary Sinise), a writer, has become a recluse in a cabin in the woods, he decides to pay a visit. He wants Zuckerman to write a book about the incident but soon realizes that the younger man, who is licking the wounds from two divorces and is at loose ends, is not up to it. The two men become friends, playing gin rummy and listening to big bands from the 1940s. In one scene, Silk convinces Zuckerman to dance with him to Fred Astaire singing "Cheek to Cheek." Silk is completely uninhibited since he has no reputation to protect anymore. Zuckerman tries to go with the flow, even though he feels a bit uncomfortable. The moment bonds the two cerebral men together in a way that all their talking has not been able to do.

Silk confesses that he is feeling so fine thanks to an affair he's having with Faunia Farely (Nicole Kidman), a sexy 34-year-old who works as a janitor at the university. She seduces him during their first encounter and as their relationship continues, Silk surprises himself with his passion, thanks to a little help from Viagra. Asking her what it's like to have sex with an old man, she promptly replies without batting an eyelash, "Perfect, no surprises."

Faunia travels light and has been moving around the country since she left home at 14 to get away from her stepfather's sexual advances. Now she's in a state of constant fear over the violent outbursts of Lester (Ed Harris), her ex-husband who blames her for the death of their two children in a fire. This Vietnam vet, who suffers from post-traumatic stress disorder, is not happy when he learns of her affair with an elderly man.

When Silk goes to see a lawyer about what can be done about Lester and an anonymous letter that accuses him of exploiting an abused illiterate woman half his age, he is told to give up his affair with Faunia because she is not in his league and not in his world. He gets the same advice from Zuckerman, who is worried about the safety of his friend. Silk tells him in simple and crystal clear words: "This is not my first love, it's not my great love, but it's my last love." Zuckerman is left speechless.

The Human Stain is based on Philip Roth's novel of the same title published in 2000. Robert Benton (Kramer vs. Kramer) directs from a screenplay by Nicholas Meyer (Sommersby, The Seven-Per-Cent Solution). The drama begins as an indictment of political correctness and a slam on how one word could trash the career of a dedicated professor. But the theme that emerges as the main one is the human stain we all leave on the world with our ambition, fantasies, lies, and rages. These marks are made by our propensity to put ourselves above others, to disregard limits, and to take all we can get.

Faunia has plenty of secrets that she slowly shares with Silk as she unclenches her fists and opens to the tenderness of someone who truly loves her. In one scene in the kitchen, she apologizes for a tirade against him. When he says how glad he is to see her, she melts emotionally and glides across the room on a fresh surge of feeling. Nicole Kidman conveys a whole range of emotions effectively here, but none so well as relieved vulnerability.

Silk has the biggest secret of all, one that he has carried his entire adult life as a burden. It is something so shocking that in flashback scenes, it sends Steena (Jacinda Barrett) fleeing from the young Silk (Wentworth Miller). It later completely estranged him from his mother (Anna Deavere Smith). Both actors portraying Silk are convincing in their depictions of a repressed soul.

One of the most poignant moments in this sophisticated screenplay is when Silk tells Faunia, "I don't think that you can measure sorrow." True enough. But unlike any recent movie, The Human Stain tallies up the pain, the suffering, and the loss that come into our lives when we refuse to acknowledge the shadow part of ourselves. To live a lie about freedom is terrible whether one is a person or a nation.

Special features on the DVD include a behind-the-scenes special, and a tribute to cinematographer Jean Yves Escoffier. 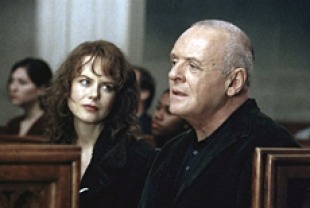