Directed by Christian Frei
An engrossing portrait of James Nachtwey, a single-minded artist of compassion, vision, and idealism who for twenty years has put himself in danger to give voice to those in peril.

This 96-minute documentary directed by Christian Frei was nominated for an Academy Award as Best Documentary Feature of 2002. It provides an unforgettable portrait of James Nachtwey, an American who has been taking extraordinary pictures in war zones around the world. A contract photographer for Time magazine since 1984, he has worked in El Salvador, Nicaragua, Guatemala, Lebanon, the West Bank and Gaza, Israel, Indonesia, Thailand, India, Sri Lanka, Afghanistan, the Philippines, South Korea, Somalia, Sudan, Rwanda, South Africa, Russia, Bosnia, Chechnya, Kosovo, Romania, Brazil, and the United States.

The great photojournalist Robert Capa once said, "If your pictures aren't good enough, you're not close enough." Nachtwey puts himself in constant danger to get close enough. And unlike some others in his profession, he demonstrates impeccable manners while photographing those in perilous or grieving situations. Nachwey believes there is an unspoken pact between himself and his subjects: he wants to show the rest of the world what is happening to them, and they allow him to make their voice heard above the din of entertainment and escapism in mass circulation newspapers and magazines.

CNN's Christiane Amanpour respects Nachwey's work and calls him "a mystery, a loner." Editor Hans-Hermann Klare of the German magazine Stern worries about the photographer's fearlessness, an attitude that certainly comes across in Ramallah, Palestine, where he is seen working in the midst of Israeli gunfire aimed at rock-hurling youth. In his "credo" about the motivations for his work, Nachtwey says: "In a way, if an individual assumes the risk of placing himself in the middle of a war in order to communicate to the rest of the world what is happening, he is trying to negotiate for peace."

In Kosovo, Nachtwey catches some moments of terrible grief as a mother mourns the death of her son. And in Rawanda, the war photographer captures the catastrophe of starvation following the civil war in which countless civilians lost their lives. "The strength of photography," he observes, "lies in its ability to evoke a sense of humanity. If war is an attempt to negate humanity, then photography can be perceived as the opposite of war and if it is used well it can be a powerful ingredient in the antidote to war."

Nachtwey states there is another war going on around the world that is not being covered or taken very seriously — the war against the poor. In Jakarta, he takes photographs of a father who lost his arm and leg living with his wife and four children on some gravel next to some train tracks. He also photographs workers at an Indonesian sulfur mine.

This powerful documentary makes a good case for the idealism that animates Nachtwey's single-minded dedication to his work. He is a compassionate person trying to tell the stories of those who have not been given a chance to be heard. This DVD includes interviews with the war photographer and the director Christian Frei. 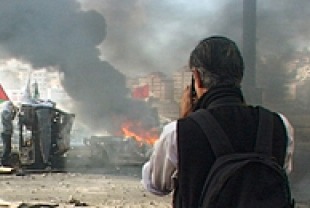