Girl with a Pearl Earring

Directed by Peter Webber
An artistic film par excellence that tells the story of one of Jan Vermeer's most known paintings with visual riches and creative integrity.

Griet (Scarlett Johansson) is a teenager who lives with her poor Protestant parents in Delft, Holland, in 1665. She is very close to her blind father, a tile maker. She reluctantly leaves him when she wins a trial period as a maid in the house of the famous painter, Jan Vermeer (Colin Firth). The artist's penurious mother-in-law, Maria (Judy Parfitt), runs the household with an iron will. Vermeer's once beautiful wife Catharina (Essie Davis) has been worn out giving birth to six children including Cornelia (Alakina Mann), who immediately dislikes Griet and begins to sabotage her every way she can. Tanneke (Joanna Scanlan), the maid, fills her new charge in on some of the spicy details about the painter, his family and his patron.

Griet's quiet and thoughtful way of doing things quickly wins her the respect of her superior. At the market, her directness and beauty attracts the attentions of Piter (Cillian Murphy), the butcher's son who wants to court her. But it is in Vermeer's studio that Griet feels most at home. It is a holy place to her, and she is intrigued by the mysteries surrounding her employer's art. Vermeer intuits that this outsider is the one person in his household capable of truly appreciating his paintings. And so he teaches her to buy and mix his paint. He explains to her the function of his camera obscura, a device used to create an accurate reproduction of a panoramic view or an interior. He challenges her to see the different colors in clouds and marvel at other wonders around her. Griet is pleased with all this attention and is even more delighted when she is given a room in the attic so she can mix his paints without any interruptions.

The tensions within the household escalate when Catharina, pregnant again, becomes jealous of her husband's relationship with Griet. Vermeer's patron, the wealthy Master van Ruijven (Tom Wilkerson) sets up a situation where the artist can secretly paint the maid without his wife knowing, since she never goes into his studio. Maria, who realizes that they badly need the money, goes along with the commission but warns Griet, "You're just a fly in his web like us all." Vermeer is inspired by the virginal innocence of his new subject and the mixture of fear and delight that are expressed in her face.

The writer Terry Tempest Williams has described eroticism as being in relation: "No longer numb we feel the magnetic pull of our bodies toward something stronger, more vital than simply ourselves. Arousal becomes a dance with longing. We form a secret partnership with possibility." In two scenes, we witness this dance with longing pass through Vermeer and Griet. In the first, he asks her to change her headdress for him, and he sees for a brief moment her unspoiled beauty and long full hair in wondrous disarray. And in the second, Vermeer orders her to lick her lips and to hold them slightly ajar as she stares at him with a half-smile and intimations of sexual yearning. There is a lightness of touch and a melancholy sense of transience in these scenes that pulls at the soul and tugs at the heart.

Girl with a Pearl Earring moves very slowly, and this is to its advantage. We feel ourselves drawn to another time when things were not directed by the tick of the clock or the pressure of immediate deadlines. Director Webber has drawn out two exceptional performances from Scarlett Johanson and Colin Firth in the lead roles. Cinematographer Eduardo Serra has created a visually sumptuous drama that brilliantly conveys the importance of light in Vermeer's world. In many scenes, everything glows with a radiance that can only be described as spiritual. The musical score by Alexandre Desplat is equally enchanting. This is an extraordinary film that stands out from the rest of the crowd thanks to its artistic riches and creative integrity.

The DVD includes the Sundance Channel's "Anatomy of a Scene" feature about the dinner party feast during which a new Vermeer painting is unveiled. There is also a music video. 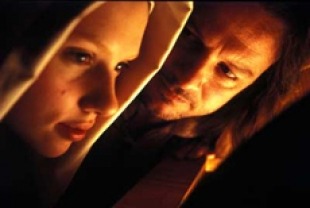 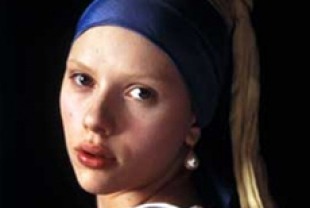