Directed by Tim Burton
An unpredictable tale about a story-loving child who still enjoys exploring dreams, fantasies, and larger-than-life adventures.

The tribal people of the Kalahari desert in southern Africa say, "A story is like the wind — it comes from a far-off place and we feel it." Stories are precious containers of spirit. They give our lives meaning. They allow us to reconstruct the past, to invoke that which has grown distant, and to open up to the great mysteries. They are good medicine in times of trouble and hopelessness.

One of the best storytellers in modern cinema is Tim Burton whose previous films have included Edward Scissorhands, Planet of the Apes, Sleepy Hollow, and Ed Wood. He has a keen appreciation for tales of whimsy and the macabre that appeal to the child in us who enjoys exploring dreams, fantasies, and larger-than-life adventures.

With Big Fish, Burton is in total control of his creative powers as a director. This extraordinary film is a treasure trove of stories based on a very clever novel by Daniel Wallace about a son who wants to know the real facts about his father's life after hearing for as long as he can remember an unending series of phantasmagorical tales about his experiences. The screenplay by John August is a tour de force concoction that mixes tender heartfelt drama with zany and oftentimes outrageous sequences. The central thrust of a father-son reunion will bring shivers of recognition to those who have sought to reconcile with distant or difficult parents. Burton and August succeed in drawing out the story-loving child in all of us. As the film moves from one wild incident to another, you will find yourself chanting: "Tell me more."

Will (Billy Crudup) is a journalist whose father, Edward Bloom (Albert Finney), cannot resist telling one of his far-fetched stories at his son's wedding. This intense young man is used to playing second fiddle to his dad, who is a superb raconteur with a great sense of humor. All his life Will has listened to tales about Bloom's adventures, yet he knows very little about who his father really is. When the old man is felled by illness, Will returns home with his pregnant French wife Josephine (Marion Cotillard). He is determined before he has his own child to find out the truth about Bloom. His mother, Sandra (Jessica Lange), hopes this quest will help reconcile the two men, who haven't spoken to each other for three years. But first Will has to recall the stories his father has told him.

Bloom contends that he dramatically entered the world with amazing speed, shooting out of his mother's womb and skidding down the hospital's hallway. At the age of eight, he is bedridden for three years because of a preternatural growing jag. During this period he reads the encyclopedia and takes this little bit about goldfish to heart: "If goldfish are kept in a small bowl, they will remain small. With more space, the fish can double, triple or quadruple in size." Bloom decides that it's time to make a bigger space for himself. As a teenager, he wows his buddies by trying to steal the glass eye of an isolated woman (Helena Bonham Carter) who is thought to be a witch by the townsfolk. Then Bloom (Ewan McGregor) gets busy doing the kinds of things that will make him stand out from the crowd — becoming a star athlete, a science fair winner, and a hero when he rescues a dog from a burning building.

One of his finest moments comes when he is presented with the keys to Cullman, Alabama, for convincing Karl (Matthew McGrory) to leave town with him. This gentle giant, seen as a monster in the fearful community, is just a confused and lonely large man. Unwilling to be a "big fish in a small pond," Bloom hits the road. He is filled with energy and enthusiasm. After wandering alone through a bizarre forest of aggressive trees, spiders, and bees, Bloom arrives in an archetypal town called Spectre where he meets Norther Winslow (Steve Buscemi), a blocked poet. Although life in this place is peaceful, he moves on with Karl to employment in a circus run by Amos Calloway (Danny DeVito), a very shrewd entrepreneur who is also a werewolf. Bloom agrees to work for him for nothing in exchange for information about Sandra (Alison Lohman), the beautiful young woman who steals his heart when he first catches a glimpse of her. Eventually, he finds her and shows the largesse of his devotion with a gift of 10,000 daffodils. Then he is drafted and volunteers for a dangerous mission in the Korean War where he winds up rescuing conjoined Korean lounge singers and recruiting them for the circus.

By now you've probably deduced that this film is filled with delightful exaggerations and unbelievable events. But as spiritual people have long known, a story does not have to be factual to be true. You know when a story contains truth. But you may need a good dose of patience to stick with inveterate storytellers who cannot stop regaling you with their raucous tales.

Bloom is a slippery character — like the proverbial fish that got away in the opening story told at Will's wedding. The determined young man visits Jenny (Helena Bonham Carter), a woman in a nearby town and learns about her friendship with his father and the startling way in which Bloom saved the town. Then from Dr. Bennett (Robert Guillaume), he hears the true account of his own birth and wonders whether he would rather believe the version told by his father. Not to be undone, Will creates a whooping tale about his father's death. As for the rest of the story's surprises, we'll let you savor them with all your senses and meditate upon their truths in your mind.

The DVD boasts seven featurettes — one about the Edward Bloom character with interviews with Albert Finney and Ewan McGregor; one about father-son relationships; one on the scenes at the circus; one about the puppets and animatronics used in the film; one about strange characters; one about the director's approach; and another about the book. There is also a very interesting audio commentary by director Tim Burton. 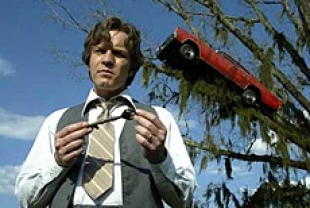 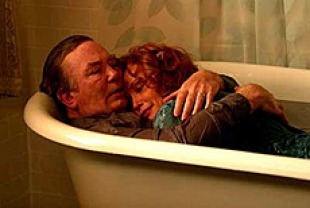 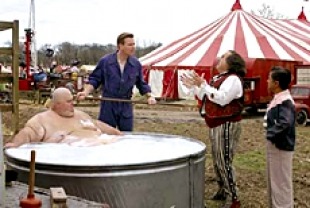 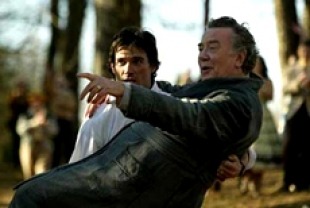 PG-13 - a fight scene, some images of nudity, a suggestive reference