Directed by Edward Zwick
A remarkable and exquisitely rendered drama that mixes the raw savagery of war with magical moments of Zen peacefulness and spiritual uplift.

The anthropologist Edward T. Hall has stated: "The best reason for exposing oneself to foreign ways is to generate a sense of vitality and awareness — an interest in life which can come only when one lives through the shock of contrast and difference." In these times when nationalism has led to ethnocentrism in so many countries, it is salutary to have a first-class movie about Japan in 1876 and an American military veteran who goes there to train fighters and ends up experiencing an inner transformation that is both healing and redemptive. Like Shogun, this film is a popular entertainment that shows how exposure to an Eastern society changes a Westerner. Like Dances With Wolves, it whets our interest for the many ways that cross-cultural experiences can open our hearts and minds to new ways of seeing the world and our place in it.

The Last Samurai is directed by Edward Zwick (Legends of the Fall, Courage Under Fire), and he has done a masterful job of choreography for both large scenes with hundreds of extras and intimate moments between the major characters. Although the screenplay by Zwick, John Logan, and Marshall Herskovitz contains three major battle sequences, it is really about the spiritual changes that come over an American warrior when he spends some time in a Japanese village in the mountains. There the way of the samurai has developed into an exquisite culture of discipline, respect, beauty, and communal solidarity. It is a blend of the traditional training of a warrior with the practice of meditation and arts usually associated today with Zen Buddhism. This section of the film is very appealing — especially in its detailed portrait of the charms of living in the present moment and savoring the transience of life.

Captain Nathan Algren (Tom Cruise) is a decorated hero who has survived the ravages of the Civil War and the bloody slaughters of Native Americans. This alcoholic and self-destructive man is overwhelmed by the accumulation of terrors he has experienced and the senseless loss of life in the protracted campaigns against the Indians. While working for the Winchester gun company, he is contacted by Col. Benjamin Bagley (Tony Goldwyn) who has set up a meeting with Omura (Masato Harada), a wealthy Japanese businessman. He is in San Francisco on behalf of the Japanese Emperor and offers to pay Algren handsomely to help modernize the Imperial Army. Algren decides to take the assignment of being an advisor, although he clearly detests the arrogance and greed of Col. Bagley, who was his commanding officer during an incident in which they slaughtered Indian women and children.

Training the Japanese soldiers to use the American-made rifle proves to be a daunting challenge. They are needed to put down a rebellion led by Katsumoto (Ken Watanabe in an Academy Award-caliber performance), the lord of a group of samurai warriors. Algren is tutored in the complexities of Japanese culture and customs by Simon Graham (Timothy Spall), his translator. This eccentric Englishman has long been fascinated by the samurai code of honor. When Katsumoto and his men attack a railway station owned by Omura, the troops are sent to stop them. But the samurai win easily. After all, they have a 900 year old tradition of protecting the Japanese people and serving the Emperor.

Algren is cornered during the battle and after fighting vigorously is taken prisoner. Katsumoto decides to spare his life and brings him to a village where his son lives. The badly wounded American becomes the guest of Taka (Koyuki), whose husband he killed just before his capture. His recuperation is complicated by alcohol withdrawal and culture shock. When he is able to walk around, he is fascinated by the way of life in the samurai village. In his journal, Algren writes: "Mostly I'm treated with a kind of mild neglect, as if I were a stray dog, or an unwelcome guest. Everyone smiles and bows, but beneath their courtesy I detect a deep reservoir of feeling. They are an intriguing people, from the moment they awake, they devote themselves to the perfection of whatever they pursue — I have never seen such discipline."

The American is also intrigued by the inner serenity of the fierce warrior Katsumoto who meditates in the temple his family built to the Buddha, writes poetry, and has a keen respect for beauty of the cherry blossom, which only a little while. The samurai lord is interested in Algren's background and his obvious mixed feelings about being a warrior. Through the winter and into spring, the American trains in the samurai ways of fighting and wins the admiration of Taka's son, who becomes quite attached to him. For the first time in many years, he sleeps peacefully and realizes that the nature of the people and the elegance of his surroundings have not only healed his wounds but given him a new sense of spiritual well-being.

Algren displays his true colors when assassins enter the village and try to kill Katsumoto. He saves the samurai's life and joins his entourage when they travel to Tokyo to meet with the Emperor. But once there, Omura has Katsumoto arrested, and it looks like Algren's time in Japan has run out. In a crucial scene, Col. Bagley, a big believer in manifest destiny, asks him: "Just tell me one thing. What is it about your own people that you hate so much?" The question startles us and hangs like a mysterious cloud over the rest of the film. It has contemporary relevance to movie-goers who find themselves in opposition to present-day nationalism and commercialism run amuck. One answer becomes apparent in the final battle: America has long been the biggest arms merchant in the world.

Zwick, Cruise, and company have made a polished and powerful drama bursting with fine performances and cross-cultural insights. Here is a rare combination: an action-filled film that also possesses many small magical moments, like when Katsumoto points to the cherry blossoms and says, "A perfect blossom is a rare thing. You could spend your life looking for one. And it would not be a wasted life." These brief and delicate scenes are all the more sweet when contrasted with the savagery of war. The mix of the small and the sweet with wild and terrible death is what makes The Last Samurai such a remarkable and exquisitely rendered film

The DVD, as could be expected, is packed with extras. Director Edward Zwick provides an audio commentary, a video journal, and an interview on making an epic. A History Channel documentary looks at "History vs. Hollywood: The Last Samurai." Other featurettes cover production design, costume design, training in use of samurai weapons, and Tom Cruise's warrior's journey. 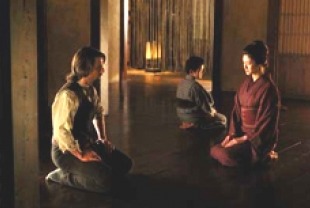 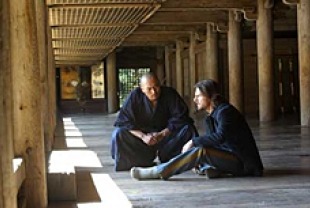 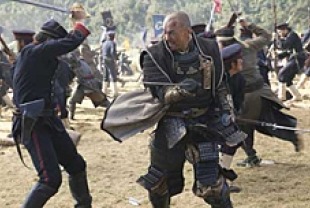 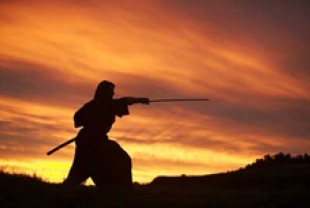