Directed by Joe Johnston
An old-fashioned adventure yarn that works well and will thrill equine lovers.

In this old-fashioned adventure yarn, Frank Hopkins (Viggo Mortensen) is a performer in Buffalo Bill's Wild West show in the 1880s. This half breed, who was raised by his Indian mother, bears a heavy burden of guilt for his role in the massacre of Native Americans at Wounded Knee. Working as a dispatch rider for the U.S. Calvary, he delivered the message that led to their annihilation.

For years, Frank has been riding in horse races and winning them all with his mustang Hidalgo. His fame has even spread abroad, bringing Aziz (Adam Alexi-Malle), a surly Arab representing a wealthy Sheikh, to America to invite him to participate in the Ocean of Fire race. It is a 3,000-mile competition across the Arabian desert that ends in Damascus by the sea. The regularly drunk Hopkins decides to take up the challenge in order to escape from his prison of self-contempt.

Once he arrives in Arabia, Hopkins, still seeking relief from his guilt, plunges into preparations for the long-distance race. He liberates a slave boy and takes on a goat-herder, making them his assistants. The Arab riders who are his competition are not happy about the presence of "an infidel" in the race, and they are contemptuous of Hidalgo, his impure mustang. Lady Anne Davenport (Louise Lombard), an aristocratic English owner of the one of the entries, is mystified by this cowboy outsider and his Spanish express pony.

The race's organizer, Sheikh Riyadh (Omar Sharif) looks down on Hopkins until he discovers that he worked with Buffalo Bill. But this wealthy man has troubles to deal with his in own family: a daughter, Jazira (Zuleikha Robinson), who is rebelling against the marriage he has planned for her, and Katib (Silas Carson), his ambitious nephew who wants to take over his horse breeding business.

Hidalgo is at its best when it focuses on the adventurous race across the desert. Not even the resourceful Hopkins is prepared for the dangers he and his horse face when they encounter a sandstorm, a locust swarm, quicksand, an ambush, and some nasty leopards. The movie, written by John Fusco (Spirit: Stallion of the Cimarron) and directed by Joe Johnston (Jurassic Park III), is carried by Viggo Mortensen's relaxed performance as the archetypal silent cowboy hero whose chief loyalty is to his horse. This love affair makes the finale into a very satisfying experience. The music score by James Newton Howard adds immeasurably to the emotional undertow of the drama.

The DVD contains two featurettes, one called "Making of Sand and Celluloid," and the other "America's First Horse: Hidalgo and the Spanish Mustang." 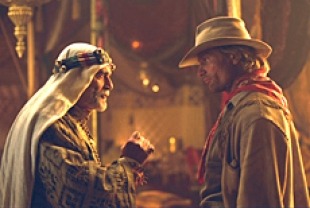 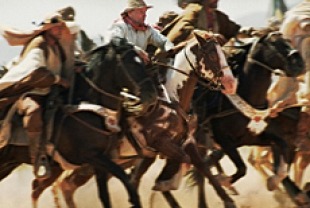