Directed by Sabiha Sumar
A quiet and elegant film set in 1979 Pakistan that presents the shadow side of hospitality, a spiritual practice that honors all religions.

In 1979, Ayesha (Kiron Kher) is a middle-aged woman living in the village of Charkhi, in Pakistani Punjab. Her husband is dead, and she receives money from his pension and gives Qur'an lessons to young girls. Her eighteen-year old son Saleem (Aamir Malik) plays the flute and is in love with Zubeida (Shilpa Shukla), a beautiful young woman from a wealthy family. She has high hopes for herself — going to college, finding a job in the city, and eventually marrying and having six servants. Saleem, on the other hand, knows that he does not want to work in the fields or some other form of menial labor. When two Islamic fundamentalists arrive in town and speak of their commitment to making Pakistan into a country that serves Allah, this confused young man is attracted to their passionate commitment and the ardor of their cause. President General Zia-ul-Haq has vowed to make Pakistan a model Islamic country. Although some of the villagers have no interest in mixing politics with their Islamic faith, Saleem gets caught up in the movement, especially when he visits a larger town with his new Muslim brothers.

Meanwhile, Sikh pilgrims from India arrive in Charkhi for their religious rituals. Saleem and his friends are contemptuous of these "nonbelievers" and push their way through the streets, ordering the Sikhs to stop their rituals. They refuse. Word goes out through the Muslim community that a pilgrim is looking for his sister who was abducted in 1947 when colonial India was divided into two countries, India and Pakistan. In pre-Partition Punjab, Muslims and Sikhs lived together peacefully, but during the Partition, the religious groups fought each other, destroying or stealing property, which included their women. Some women were forced by their fathers and brothers to commit suicide rather than be the source of their family's dishonor should they be taken by the other side. Others were abducted, raped, sold as slaves, or murdered. A few married their abductors. The official number of abducted women was placed at 50,000 Muslims in India and 33,000 Hindus and Sikhs in Pakistan.

Ayesha is one of the survivors who married her abductor. When her brother finds her, he says that their father is dying and wants to see her. All of her fears from the past rise to the surface of her consciousness. Saleem's reaction to his mother's past is to make an even firmer commitment to the Islamic cause. Ayesha is anguished over her son's unloving attitude toward her and the immense burdens of pain and sorrow that she has carried in secret for years. When she discovers that her own community is shunning her, it is too much for her to bear. The only one who stands by her is Zubeida, who has been rejected by Saleem and knows the feeling of being isolated.

Sabiha Sumar is the director of this extraordinary film that reveals the shameful treatment of a decent and honorable woman. The director won the Golden Gate Award at the San Francisco Film Festival for Who Will Cast the First Stone (1988) about working-class women's protests against Islamic laws in Pakistan. This is her first feature film, and it graphically depicts the suffering women have to endure because of religion, politics, and patriarchy.

In one of the most telling scenes, Ayesha is teaching some young girls about the Qur'an. She says that not only believers but others as well will have a chance to go to heaven. This openness to all religions is evident in this woman's words, and it is expressive of Sufism, the mystical dimension of Islam. In the press notes, Sabiha Sumar talks about her Sufi upbringing and how important it has been for her. Certainly this spiritual path offers an alternative to the abrasive Islamic fundamentalism that eventually consumes the lives of Saleem and his friends. Silent Waters, in its own quiet and elegant way, presents the shadow side of hospitality, a spiritual practice that honors all religions. 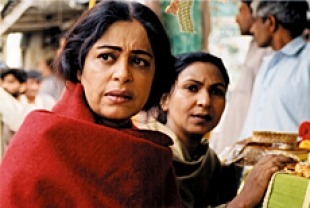