Directed by Jennifer Abbott, Mark Achbar
A bold, creative, and prophetic critique of a beast that has grown too powerful and too dangerous to ignore any longer.

The power of large, publicly-traded corporations is awesome and deeply troubling. The mandate of this type of institution is to pursue its own self-interest — to make money for its stockholders, no matter what happens to other people or to the good Earth. This hard-hitting, wide-ranging, innovative, and thought-provoking documentary is directed by Mark Achbar and Jennifer Abbott and based upon Joel Bakan's book The Corporation: The Pathological Pursuit of Profit and Power. It was the Best Documentary winner at the Sundance Film Festival and a People's Choice Award Winner at the Vancouver, Calgary, and Toronto festivals.

Although many people are already aware of the clever strategies used by some corporations and their lawyers to make money, skirt the law, influence politicians, and eschew accountability; Achbar and Abbott set out to present more shocking evidence of why the public should be worried about these institutions. They present more than 40 interviews with CEOs, economists, academics, critics, historians, advertisers, the first management guru, a corporate spy, and many others.

After establishing the rise of the corporation in the mid-1880s, the filmmakers chart its swift ascent to power and wealth. Externalizing costs is one ploy that has been used to advance its cause, despite the untold havoc in terms of illness, poverty, exploitation, and pollution that comes with it. In order to further explore the "personality" of the corporation, the filmmakers use the psychological diagnostic tool, the DSM-IV, and find that the corporation matches the character qualities of a psychopath: it is self-interested, inherently amoral, callous, and deceitful; it breaks social and legal standards to get what it wants; it is not animated by guilt but can mimic the sterling qualities of empathy, caring, and altruism. Achbar and Abbott demonstrate this pathology with four case studies drawn from corporate activity.

Ray Anderson, CEO of Interface, the world's largest commercial carpet manufacturer, speaks for all those within the corporate community who believe that it is time for a change. After reading Paul Hawken's The Ecology of Commerce, he re-organized his $1.4 billion company on sustainable principles and began speaking to other CEOs about taking care of the future generations rather than being "plunderers" concerned only with short-term profits.

This salutary approach is at odds with other egregious examples of corporate greed. With great enthusiasm, Lucy Hughes, Vice President of Initiative Media, describes campaigns designed by her company to encourage kids to nag their parents to buy junk food and to take them to fast food restaurants. The strategy is to hook children so they will be cradle-to-grave consumers. Another example is Celebration, the city built in Florida by Disney, or the two college students who have found corporate sponsors to pay their tuition in exchange for services. The filmmakers poke fun at the corporation that owns the rights to the song "Happy Birthday" by showing a scene of youngsters singing with no sound underneath. Michael Walker of the Fraser Institute argues that one day every single thing on the planet will be privately owned. Aggressive campaigns are now underfoot to patent animals, plants, and even human DNA.

In segments on corporate influence in Washington, D.C., and the high cost of whistle-blowing, the filmmakers make it clear that it will not be easy to challenge this behemoth or tame it any time soon. But there are baby steps that have been taken in various communities such as Arcata, California; in Bolivia where the people won a battle against a transnational corporation that privatized the water system; and in India where a campaign was successfully waged against Rice Tek's attempt to patent basmati rice. In another scene, Michael Moore challenges viewers to take back the power they have given to corporations and to make them more accountable.

The Corporation is a prophetic critique of a beast that has grown too powerful and too dangerous to ignore any longer. 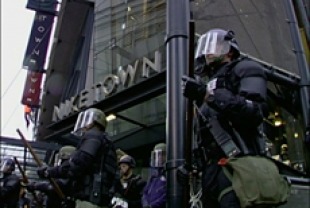