Directed by Jared Hess
A quirky and appealing comedy set in Idaho about an oddball teenager who waits patiently until he gets his chance to shine on his own terms.

Napoleon Dynamite (Jon Heder) is an oddball in Preston, Idaho, and he doesn't care. He lives in his own private world of phantasmagorical creatures (he sketches a "liger," which is a cross between a lion and a tiger) and concentrates on perfecting his tether-ball game. Some very interesting films have been made over the years about idiosyncratic teenagers, and this one is both wacky and endearing. It was a hit at the Sundance Festival and named Best Feature Film at the U.S. Comedy Arts Festival. Director Jared Hess has come up with a story that challenges us to put ourselves in his characters' skins as we retread our ways down those high school corridors where pain and humiliation are only a step a way.

Napoleon lives with his grandmother, who secretly has a boyfriend and rides her ATV on the sand dunes. When she is injured in a spill, Napoleon's Uncle Rico (Jon Gries) comes to look after him and his 32-year-old brother Kip (Aaron Ruell), who spends most of his time in a chat room with Lafawnduh (Shondrella Avery), his soulmate. Napoleon doesn't get along with Rico, who is constantly coming up with new schemes to get rich, such as selling herbal breast enhancements. He lives in a twilight zone of 1982 when he was denied the chance to become an all-star quarterback just when his team needed him most. No wonder he purchases a mail-order time machine and winces when it doesn't work.

Feeling isolated at home, Napoleon makes friends with Pedro (Efren Ramirez), a Mexican newcomer to the town. The two of them are shunned by everyone and yet they persist in outrageous dreams. Pedro wants to take Summer Wheatly (Haylie Duff), the school's most popular and attractive girl, to the prom but is turned down abruptly. Eventually, he decides to run for class president against her. Her campaign slogan is: "With me, it will be summer all year round."

Although Napoleon is attracted to Deb (Tina Majorino), a shy girl who is the town photographer, they have a hard time connecting. They are heart people who realize they are strange but are willing to live with it no matter what the consequences. Deb is the sweetest teenager in town always doing her best to make others look good.

Jared Hess wrote the offbeat screenplay for Napoleon Dynamite with his wife Jerusha. They have created a colorful and cockeyed character in Napoleon with his overbite, large glasses, frizzy red hair, irritation with those who bug him, and frequent temper tantrums. He gets his kicks by riding his bike, performing sing-alongs with the Happy Hands Club, and cow judging with the Future Farmers of America. Near the end of the film, Napoleon gets a chance to strut his stuff, and it is well worth the wait to see him shine on his own terms. 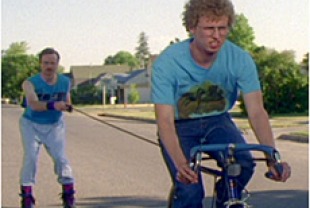 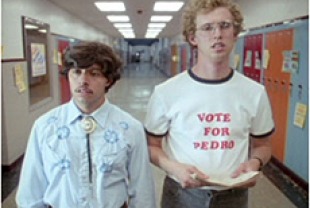 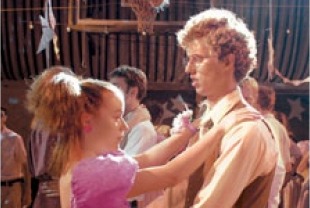