Directed by Steven Spielberg
A light-hearted and thoroughly entertaining film about the joys that can be ours when we slow down, practice deep listening, and cultivate the art of patience.

In an essay in The Global Soul about some time he spent in the Los Angeles International Airport, Pico Iyer writes about the place as having all the amenities of a modern metropolis, a mysterious space filled with individuals from all cultures tingling with hopes and dreams, where people have out-of-the-body experiences brought on by jet lag and where strangers reach out to each other with the camaraderie of exhausted travelers with jangled nerves. It's an environment that often strikes us as a mirror of modern ills including bureaucracy, fast-food, consumerism, and free-floating rage that frequently explodes out of impatience.

The Terminal, directed by Steven Spielberg, is based on a story by Andrew Niccol and Sacha Gervasi. This parable about modern life, America, and the spiritual virtue of waiting is filled with magical moments that demonstrate the joys that can ensue when we slow down, practice deep listening, and learn the art of being present with others. This spiffy entertainment is light-hearted and playful, especially in its varied portraits of the working-class men and women who are employed in international airports. Tom Hanks gives a rounded and moving portrait of a man who models for us the art of patience or waiting with equanimity.

While Viktor Navorski (Tom Hanks) is flying to New York City, a military coup takes place in his Eastern European country of Krakozhia. At John F. Kennedy International Airport, he is told by the airport's chief officer, Frank Dixon (Stanley Tucci), that his visa, issued by the previous government at home, is not valid, and since the U.S. State Department has refused to recognize the new regime, all flights back to his country have been cancelled. This means that Navorski is for the time being a man without a country. Or as Dixon puts it, he is "unacceptable" for entry into America, and he can't be deported. The only solution for this shy and befuddled man is to stay in the international transit lounge until things are resolved in Krakozhia. He is given an identification card, some coupons for food, and a pager.

Viktor, who speaks only a little broken English, does not really understand what has happened to him. He watches the television monitors in the international transit lounge and begins to comprehend the chaos and violence in his homeland. With nothing to do but to wait and find out his fate, Viktor decides to make the best of a bad situation. After losing his food coupons, he becomes more resourceful. He discovers that he can get a quarter for each luggage card he returns to the carousel. He creates a private bedroom in an unused part of the building that is under construction. And Viktor even relaxes enough to wear his robe one morning in the food court. Dixon cannot believe how easily Viktor adapts to his situation. He asks customs officer Ray (Barry Shabaka Henley) to keep an eye on this foreigner, who is winning over the allegiance of many of the airport workers with his unassuming and friendly ways.

Enrique (Diego Luna), a food service worker, calls upon Viktor to serve as his intermediary in expressing his love for Delores (Zoe Saldana), an immigration officer. Viktor sees her regularly in a vain attempt to have his paperwork stamped "Approved." Instead of blowing his stack as most people would do, he patiently handles the rebuffs and establishes a pleasant relationship with the attractive young woman. Gupta (Kumar Pallana), an elderly janitor from India, thinks that Viktor must be a spy or CIA agent and doesn't trust him. His main source of entertainment is watching people disregard the yellow caution cones and slip on the floor that he has just waxed. But Viktor wins him over when he joins a group of workers including Mulroy (Chi McBride), a baggage handler, to play poker for items left behind or lost by airline passengers.

All of Viktor's friends and observers are intrigued by the mysterious tin of Planters Peanuts that he carries along with him and treats like a holy object. But Viktor only reveals its secret to Amelia Warren (Catherine Zeta-Jones), a flight attendant who is in an on-again off-again affair with Max (Michael Nouri), a handsome married man who regularly meets her in the transit lounge. She and Viktor bump into each other several times, and he even treats her to an intimate dinner that he orchestrates with his new friends. Viktor listens to her confessions about how bad her choices in men have been and shares her appreciation for the love between Napoleon and his wife. The latter inspires him to construct a huge gift for Amelia which leaves her speechless.

Meanwhile, Dixon becomes increasingly irritated, even enraged, by Viktor's presence in the terminal. To this precise man, Viktor is a bureaucratic embarrassment, something he doesn't need to have around when he is being considered for an important promotion. He tries several times to get Viktor out of the place, including leaving the main door unguarded so he will leave and come under someone else's jurisdiction; he even tries to get him declared a National Security risk and put in a Federal Detention Center. In one of the most telling encounters between the two men, Dixon calls upon Viktor to serve as an interpreter for an Eastern European who is carrying undeclared medicine that he wants to take home. The officer's play-it-by-the-book rigidity comes off badly in comparison to Viktor's more compassionate approach. What's more, there is just something about the foreigner's casual demeanor and unassuming passivity that drives the hyper-serious Dixon up a wall.

By the end of the story — which takes place over a span of nine months — Viktor has made the terminal into a home, and his new airport family has come to know and respect him. He has modeled a way of living that we would do well to emulate, proving that, as the African proverb says, a patient man has all the wealth in the world. 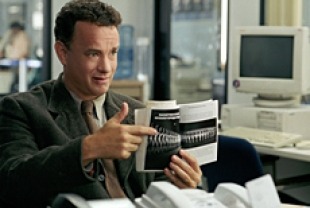 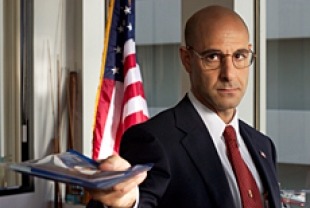