Directed by Jean-Jacques Annaud
An extraordinary film about two wild tigers and the human beings who are changed irreparably by their encounters with these magnificent and mysterious creatures.

Under the smiling face of a Buddha in a ruined temple in the jungles of Cambodia, two tiger cubs are playing. They wrestle with each other, toy with their mother's tail, and chase a coconut down a hill. Kumal is the stronger and more aggressive of the two; Sangha is shy and unwilling to take risks. Their differing natures are demonstrated in an encounter with a angry mother civet who is protecting her little ones in a cave: Sangha flees up a tree while Kumal wants to fight her. Sangha is never far from his mother, and she often carries him to safety by the scruff of his neck. Kumal follows close behind if there is any sign of trouble.

And trouble does come to their pleasant life when a party of humans led by Aidan McRory (Guy Peace) arrives in their habitat. He's a well-known author and hunter who has been operating in Africa, making money from selling elephant tusks. But Asian religious relics are fetching a higher price in 1920s Europe, so he has bribed the local tribes and brought a crew to help him carry off statues from the ancient temples.

When McRory comes upon Kumal, Sangha, and their parents, he is forced to kill the male tiger after he attacks one of his men. The mother tiger carries Sangha to safety, but Kumal is separated from them and captured. McRory feeds the little one honey drops and is surprised to find himself bonding with him. The tribal chief feigns pleasure with the white man for killing a tiger — his son lost a leg to one of them — but offered another bribe, he betrays him to the authorities. McRory is hauled off to prison for looting statues, and the little tiger is given to the local circus. Kumal's mother makes a valiant attempt to rescue him by leaping on the back of the truck carrying him away, but she is falls off and with Sangha must watch as one brother disappears down the road in a cloud of dust.

No one takes a fancy to Kumal at the circus. Zerbino (Vincent Scarito), the animal tamer, and Saladin (Moussa Maaskri), the vicious manager who has no respect for animals, are determined to make him the next ferocious man-eater star in their show. Kumal's once proud and bold spirit is subdued, and he loses his spunk, lying listlessly in his cage and soporifically learning new tricks, such as jumping through a ring of flames.

Normandin (Jean-Claude Dreyfus), the local French administrator, has a money-making scheme that involves building a road through the jungle to attract tourists to the temple sites. He gets McRory out of jail and talks him into leading a hunting expedition for the Prince (Oanh Nguyen) and his new fiancée (Stephanie Lagrande) in hopes of convincing this leader to give permission for the road. At the temple grounds, the Prince shoots the mother tiger, but she is only wounded in the ear and escapes.

Little Sangha is found by Normandin's young son Raoul (Freddie Highmore), who immediately falls in love with this cuddly cub. He takes him home to live in his bedroom. His mother (Philipine Leroy-Beaulieu) is not as happy with this arrangement and her favorite pet dog is even less enthusiastic about the arrival of this competitor. After an ugly confrontation between the two animals, Sangha is taken to the Prince's royal menagerie. Despite the wayward paths of Kumal and Sangha, they are destined to be reunited, although not in the most auspicious circumstances.

It has been 16 years since the release of Jean-Jacques Annaud's The Bear, and we are elated to report that he has created another masterwork that is sure to raise people's consciousness about wild animals — their beauty, intelligence, and mystery. Two Brothers, like its predecessor, is not a nature documentary but a story in which the actors are trained animals allowed to behave as they would in the wild. The screenplay, cowritten by Annaud and Alain Godard, reflects careful research into how tigers play, raise their families, recognize each other, and vocalize. These expressive animals create a convincing and heart-warming story under the direction of head trainer Thierry Le Portier. The cinematography by Jean-Marie Dreujou, especially of the temples in Angkor, Cambodia, is breathtakingly beautiful.

Annaud's sensitivity to the wide range of tiger behaviors and his respect for their natural instincts makes our experience of them in the film akin to being in the wild. We discover that our senses are open to all the wonders and terrors of life in the bush. Anyone who is fortunate to have cats as pets will derive even more pleasure from recognizing similar delightful habits in these athletic beings.

The salutary message of this extraordinary movie is that we should reverence tigers and all wild animals for the glimpse they give us of the beauty and diversity of creation. It is a wonder to behold the changes that take place in McRory as he opens his heart to Kumal. Even more uplifting is the love that young Raoul has for Sangha and his anger at those who want to kill him. After this close encounter with these two magnificent tigers, you will want to add your voice and your donations to organizations working to save the lives and habitats of all the other Kumals and Sanghas in the world. 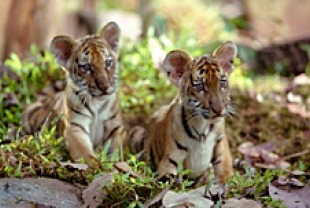 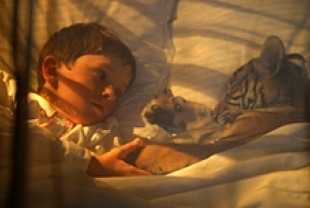