A Home at the End of the World

Directed by Michael Mayer
The emotional tale of a natural born lover who brings joy and sexual fulfillment to those lucky enough to be part of his extended family.

In 1967, nine-year old Bobby Morrow (Andrew Chalmers) has a hippie older brother Carlton (Ryan Donowho) who loves music, having sex with his girlfriend, and dropping acid in a local cemetery. From him, Bobby learns that the world is a good place filled with beautiful things. Above all, Carlton assures Bobby that there is nothing to fear and that all will be well. Then, in keeping with his respect for the inexplicableness of life, he dies in a freak accident.

Seven years later in high school, Bobby (Erik Smith) befriends Jonathan Glover (Harris Allan), an insecure and lonely teenager. They like the same music and are soon buddies. One afternoon while they are smoking marijuana in Jonathan's room and listening to an album by Laura Nyro, his suburban mother Alice (Sissy Spacek) comes in. Without exhibiting a shred of guilt or shame, Bobby offers her a drag and then asks her to dance. Disarmed by his sincerity and good will, she responds to the beauty and naturalness of this magical moment. Bobby's mother has been dead for a year, and when his father also passes away, he moves in with Jonathan and his parents. For him, there is nothing more important than to be surrounded by loved ones.

This emotionally resonant movie is directed by Michael Mayer and written by Michael Cunningham (The Hours), based on his 1990 novel. Imagine a person who is able to freely and without reservation express his affection for both sexes. How many people have you known who are able to instantly make another feel special by taking him or her into a warm embrace or dancing closely cheek-to cheek? What would the world be like if it consisted of people who saw the world as a mysterious and friendly place rather than a terrible and dangerous one? And what are we to make of those who have the blessed ability to create new and wondrous friendships and even families when the time is right and the circumstances call for a change? Home is where the heart is may be a familiar cliché but it is also the truth for those who are open, honest, and free. A Home at the End of the World is a beautifully acted and emotionally rich drama that brings all these themes into play in a knockout screenplay that has the same depth as The Hours. It challenges us to see love as the fulcrum of the universe and the vital force that makes life so rewarding.

When the Glovers move to Arizona, Bobby (Colin Farrell) heads to New York City to reconnect with Jonathan (Dallas Roberts). He lives in the East Village with bohemian Clare (Robin Wright Penn), a divorcee who works in a shop making wild and crazy hats. Bobby gets a job in a bakery. Although Jonathan has many gay lovers, he wants to parent a child with Clare. But she falls in love with Bobby. When they are in Arizona for the funeral of Jonathan's father, she announces that she is pregnant. The three of them move to Woodstock and create their own family in a large house they make their own. Bobby and Jonathan open a restaurant, and Clare takes care of daughter Rebecca. But she didn't expect to end up as the mother and the wife.

What's more, she is aghast at Bobby's ability to adapt to new circumstances and his capacities as a natural born lover. In one remarkable scene that pretty well sums up his character, she says to him: "You are a strange and mysterious creature." Is it possible to bring into the world children who are trusting and open rather than cautious and frightened? Bobby carries the angelic spirit of his brother in his heart and passes this love on to those who become part of his extended family.

No doubt some filmgoers will find this drama to be too dreamy and unrealistic, a left-over fantasy from the Sixties. But we love the "big, beautiful, noisy world and everything that can happen" that is celebrated in this story. After so many movies about natural born killers, what a miracle to experience one about a natural born lover! And anything that brings back into our consciousness the lyrical purity of Laura Nyro singing deserves nothing but unadulterated praise.

The DVD has the theatrical trailer plus a short feature, "The Journey Home," in which the actors and director talk about the themes of the movie. 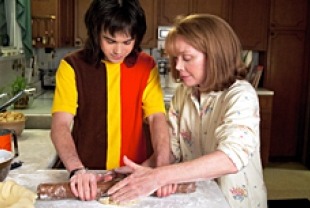 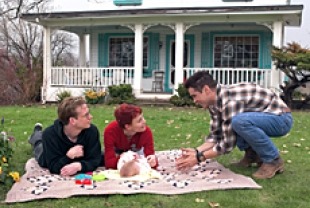