Directed by Allan Kroeker
A guided tour into the land of the long lived, filled with poignant moments of humor, sadness, conflict, and revelation.

Most of us will, at some point, have a parent in a nursing home — or we will find ourselves there for the last stages of our lives. Age-Old Friends offers a preview of what the future might hold for our loved ones and ourselves.

The film is based on Bob Larbey's Broadway and London play; it was an HBO Showcase presentation on cable television during the 1989-1990 television season. The two stars, Hume Croyn and Vincent Gardenia, both received Emmy Awards for their performances.

The story is about John Cooper (Croyn), a widower who lives in a room of his own at Twin Pines retirement home. He doesn't go out at all for fear he will fall down. Trying to keep his spirits up, Cooper enjoys flirting with Nurse Wilson (Michele Scarabelli) and venting his sarcasm with Mrs. Baker (Esther Rolle), a cleaning woman. Cooper's best friend is Michael Aylott (Gardenia), a physically hearty man who is beginning to lose his mental faculties. The two buddies create several rituals to give their days structure, including a memory game about the 1937 New York Giants starting line-up, a drawn out game of chess, and a daily toast to their two-man "escape committee." On the fourth Sunday of every month, Cooper's middle-aged daughter Julia (Tandy Croyn) comes to visit. Father and daughter don't get along very well until they finally express their feelings and failings to each other. When Nurse Wilson announces her plans to get married and leave Twin Pines, Cooper wonders whether he should act upon Julia's offer to come live with her and her family. Meanwhile, Aylott's mental condition is deteriorating fast and he seems just a few steps away from "zombieland." Cooper realizes that the choices he makes about his future will affect not only his happiness but also the well-being of others.

Filled with poignant moments of humor, sadness, conflict, and revelation, Age Old Friends is a guided tour into the land of the long lived. There are interesting side trips on the meaning and value of friendship, memory, feeling needed, and the choices which color our share of happiness. 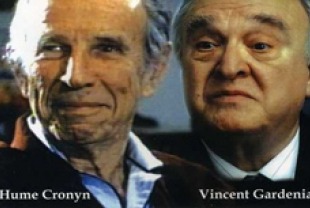