Directed by Jonathan Demme
Revives the paranoid thriller genre with an engrossing tale of politics, corporate power, and mind control.

In this updated version of The Manchurian Candidate, director Jonathan Demme has revived the moribund genre of the paranoid thriller that was so well done in the 1970s with films like The Parallax View and All the President's Men. The topical screenplay by Daniel Pyne and Dean Georgaris, based on a novel by Richard Condon and the previous screenplay by George Axelrod, contains references to a gigantic corporation that works closely with the military and can do whatever it wants, U.S. military activity in Indonesia and Guinea, the plight of the poor, the distress of elderly individuals who do not have money for drugs they need, and the rampant fear of terrorism.

In a scene of relevance to the sad state of politics in America today, a wishy-washy cadre of honchos from the out-of-power political party are persuaded by a dynamic Eleanor Prentiss Shaw (Meryl Streep), a Senator with great patriotic fervor, that they should ditch their original choice for Vice President, the old-time liberal Thomas Jordan (Jon Voight), for her son Raymond Shaw (Liev Schreiber), a wealthy young man who won the Medal of Honor in the Gulf War. She is a major player in the future of Manchurian Global, a corporation that has interests extending way beyond their military contracts. Here money carries the day and the manipulative Eleanor finds a way to achieve through her son what she was unable to get herself — access to the highest level of political power and prestige in the land — the White House.

Meanwhile, Major Marco (Denzel Washington), who served with Raymond Shaw in Kuwait in 1991, has watched his rise to fame with great interest. This dedicated soldier has been having strange and unsettling dreams about what took place in Kuwait. Instead of Shaw's heroics, Marco sees his men wired to strange contraptions and speaking on television monitors. They are being ordered to perform actions by Atticus Noyle (Simon McBurney), a scientist. Marco has a chance encounter with Corporal Al Melvin (Jeffrey Wright), another member of the platoon, who has been having the same weird dreams. When the major meets with Pentagon officials and tells them about his and Melvin's experiences, they reject the idea that a squad of U.S. soldiers could have been hypnotized into believing that Shaw was a hero in a firefight. Marco goes to see with Richard Delp (Bruno Ganz), a rogue scientist to tell him about an implant that was dug out of his back but lost when it fell down the drain of the sink. His old friend advises him that his paranoia is just another symptom of the Gulf War syndrome. Later, Marco is told by his commanding officer that he has been relieved from duty and must report to a neurologist as Walter Reed Army Hospital.

In the 1962 version of The Manchurian Candidate directed by John Frankenheimer, the emphasis was upon the brainwashing of American soldiers by Communists. The villain in this telling of the tale is a corporation that has found a way to program Raymond's brain and then put into play all its wildest desires. We cannot go any further without spoiling the ending, but we would add that although some of the plot developments seem a bit far-fetched, one of the most interesting points made by the screenplay is the scandalous and shabby treatment of the Gulf War veterans. The mainly African-American men who risked their lives there are not being given the moral and emotional support they need to combat the dire effects of Gulf War syndrome. While the rich and powerful capitalize on Shaw's heroics on the battlefield in Kuwait, men like Al Melvin spend the rest of their lives in Skid Row hotels, lost in a haze of nightmares and violence. In the end, this respect for the plight of Gulf War veterans is the strongest residue of this entry into the paranoid thriller genre of movies. 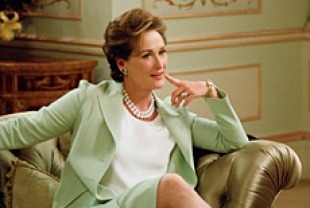 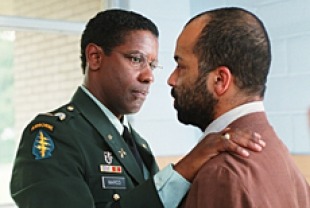