Directed by Michael Mann
An engrossing thriller set in Los Angeles about an insecure and procrastinating cab driver whose life is transformed by his encounter with a merciless hit man.

Michael Mann is a masterful mood-maker and in this engrossing thriller he uses the sprawling city of Los Angeles as one of his characters. The other leads are two men thrown together by chance who spend one night in a maelstrom of tension, violence, and improvisation. Shooting most of the film in high-definition digital video enables the filmmaker to vividly evoke the mysteries of the night in a place where strangers pass each other in their speeding cars and where men and women desperate for some pleasure gather in clubs to numb themselves in frenzied dancing and drinking. Although the action is a wild ride, the screenplay tightly focuses on a merciless hit man and a procrastinating cab driver who has been unable to actualize his dreams. One moves with determination to achieve his goals while the other remains stuck.

Max (Jamie Foxx) has been driving a cab for 12 years and still views his work as "a part-time filler job." He wants to start a limousine company but has been unable to muster the courage to take the leap into the dark as an entrepreneur. All he can do is talk about it to his customers — like his first ride of the evening, Annie (Jada Pinkett Smith), who turns out to be a prosecutor facing an all-night session preparing for a major case in the morning. She is very taken with Max's soft-spoken sincerity and gives him her business card.

The next person who enters the cab is Vincent (Tom Cruise), an intense, well-dressed man who offers Max $600 to escort him to five appointments through the night and to the airport in the morning. Thinking that things might be looking up, Max accepts.

Much to his dismay, while he is waiting for Vincent to return from his first meeting, a body crashes on the roof of the cab. It turns out that his cool customer is a hit man with four more assignments to complete. They stuff the dead man in the trunk and then are stopped by the police who want to impound the cab since Max is driving with a broken windshield. This happens to be only the first of many incidents which test Vincent's improvisational abilities; he prides himself on being able to handle anything that crosses his path. Max, of course, is the polar opposite. On a detour to visit his hospitalized mother (Irma P. Hall), she sums up his character and provides a funny and telling line on the spiritual undertow of the entire movie: "You have to hold a gun to his head to get him to do anything!"

In another encounter in a jazz club, Max is led to believe that Vincent actually has a heart beating somewhere under his fancy suit as he shares his love of jazz with the owner (Barry Shabaka Henley), who recounts the magic of playing one evening with Miles Davis. But he's wrong again. Perhaps the most astonishing scene is when Vincent orders Max to impersonate him in a scary encounter with a drug kingpin (Javier Bardem). The unarmed cab driver, convinced that he might be shot at any moment, realizes in the process that he is capable of doing anything if he just does it without pondering the consequences and freezing in fright.

In a book written with Jeff Zaleski called Transformations, Carol Cochran describes how being brutally mugged one evening turned out to a spiritual transformation in her life. It is possible that any kind of emergency situation can turn us around and help us to see ourselves and the world with fresh eyes. Max's gharish and terrifying journey with Vincent compels him to move beyond the insecurities and fears that have imprisoned him for 12 years. The cruel killer who describes his work as "taking out the garbage," serves as a catalyst for the cab driver to tap into his previously uncovered abilities to act decisively in order to save his own life and others.

Cruise and Foxx give terrific performances in this thriller which lingers in the mind long after the closing credits. Another contributing factor to the film's effectiveness is the impressive percussive sound work in the music of James Newton Howard! 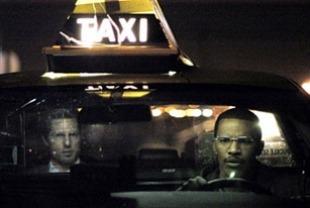