In the book No Sense of Place, Joshua Meryowitz wrote "Children today seem less 'childlike.' They speak more like adults, dress more like adults, and behave more like adults than they used to. We might call this trend 'the end of childhood.' But that would tell only half the story, for without a clear sense of childhood, there can be no distinct notion of childhood. Indeed, there are indications that many of the adults who have come of age within the last 20 years continue to speak, dress, and act much like overgrown children. What seems to be happening in our culture is an overall merging of childhood and adulthood."

In Big, Josh Baskin (David Moscow) is a 12-year-old suburban New Jersey kid who is fed up with being small and insignificant. At a local carnival, he asks Zoltar, a wishing machine, to make him big. In the morning, Josh wakes up to find himself in the body of a young man (Tom Hanks). Although his brain and personality remain the same, his mother doesn't recognize him. She thinks he's a burglar. Josh seeks help from his best friend Billy (Jared Rushton). They go to New York City where they hope to locate the whereabouts of the wishing machine. Meanwhile, Josh checks into a sleazy Times Square hotel and then lands a job as a computer operator at a toy company. He concocts a kidnapping tale which allows him to keep in touch with his mother. While playing around in the F.A.O. Schwartz toy store, Josh runs into his boss (Robert Loggia). Amazed that Josh has such a knack for understanding what kids really like in toys, he makes him a Vice President for toy development at the company. Josh moves into a spacious loft which he turns into a playground. To top it all off, he wins the attention of Susan (Elizabeth Perkins), a very attractive workaholic. She finds his boyish charms more appealing than the corporate competitiveness of her boyfriend (John Heard). Eventually the pressure of designing a new line of toys and the responsibilities of his relationship with Susan drive Josh to a yearning for the simpler pleasures of boyhood and life at home. When Billy finds the wishing machine, Josh faces his moment of decision — to remain in the brave new world of adulthood or to return to childhood.

Filled with buoyancy and creative energy, Tom Hanks' performance is a wonder to behold. The screenplay by Anne Spielberg and Gary Ross pokes fun at corporate gamesmanship, sexual politics, and age differences.

Increasingly, our era is characterized by a merging of childhood and adulthood. Children act like adults, and adults persist in childlike behavior. Big proffers the idea that fantasy is one of the best — and most health — ways to bridge the gap between the generations. The story will appeal to children who don't want to grow up too fast and adults who yearn for the spontaneous play of childhood. 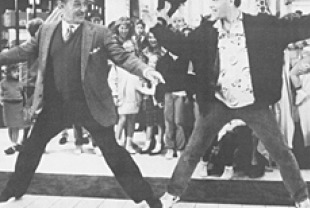