Directed by Daniel Petrie
Offers viewers an opportunity to clarify their own definition of the good life, to explore family matters, to examine the contrasts between country and city living, and to discuss some of the challenges of individualism.

Contemporary film and fiction are filled with portraits of men who wield power, go to war, and lead others. In the long run, however, it is ordinary people who make the world go round. They do useful work, raise their families, and try to pass on something of value to the next generation. Their heroism is the quiet heroism of making do. Few good stories exist about them, but The Dollmaker is one such example.

This engaging drama centers around an Appalachian woman who struggles to "deal gently and justly" with her family and herself when they move from rural Kentucky to urban Detroit during World War II. Jane Fonda stars in this film based on Harriette Arnow's 1954 best-selling novel which literary critic Joyce Carol Oates has called "our most unpretentious American masterpiece."

In 1944, Gertie and Clovis Nevels and their five children live on a small rented farm in rural Kentucky. She is a practical and resourceful woman. Despite their meager income from sharecropping and Clovis's work as a handyman, she has managed to save $350. She loves the land and plans to buy a farm of their own when Clovis goes into the army.

The day of his physical examination, Clovis leaves instead for Detroit to work in the war plants. Gertie, who has already made a down payment on a farm near her parents' home, reluctantly takes back her money and moves the family to join him. Their flat in the company-owned city housing project has running water and electricity but is cramped and bleak. Clovis is determined to give his family the things they have never had before, even if it means buying on credit. Gertie, who is not used to living this way, wards off depression by pursuing her hobby of wood carving. When Clovis and the other union workers go on strike, she helps support the family by selling dolls she has whittled.

Things go from bad to worse. Reuben, the oldest boy, has trouble adjusting in the overcrowded school. Often in fights, he tires of being treated like a "hillbilly" and leaves for Kentucky where he can help his grandparents on their farm. Cassie, the youngest girl, is ridiculed for having an imaginary friend, Cally Lou. The other children and Clovis insist that the child quit talking to herself, and Gertie agrees to speak to her. One day Cassie goes across the railroad tracks to play with Cally Lou and is killed by a passing train. In a state of shock and grief, Gertie continues working on a large carving of Christ in cherrywood block. Then Reuben calls with the news that her father has died and the farm may be put up for sale. When Clovis is hurt in a union scuffle and is forced to go into hiding, Gertie takes her family's future into her own hands.

The goal for most citizens has been to achieve all that money can buy and to pass on to one's offspring the fruits of the American Dream. Some people, however, have questioned the majority's assumption that "the good life" can be measured by material possessions. They have emphasized alternatives, often settling upon an outwardly simple life that is inwardly rich. Such is the position of Gertie Nevels. The Dollmaker offers viewers an opportunity to clarify their own definition of "the good life," to explore family matters, to examine the contrasts between country and city living, and to discuss some of the challenges of individualism. 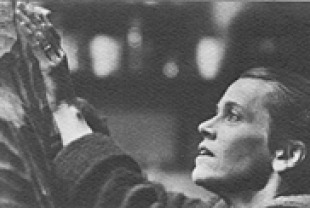