Directed by Garry Marshall
An emotionally appealing film that taps into our primal feelings about money, power, pleasure, shame, intimacy, and love as a redemptive power.

Pretty Woman is a romantic comedy offering a perky retelling of the Cinderella story with bits of Pygmalion mixed in as well.

Edward Lewis (Richard Gere) is a rich, recently divorced, corporate raider from New York who is in Los Angeles to close a deal. Lost driving to his hotel, he stops to ask Vivian (Julia Roberts), a Hollywood Boulevard hooker, for directions. For $20, she directs him to Beverly Hills. He invites her up to his penthouse suite and then decides to offer her a business proposition: he'll pay her $3,000 if she will stay with him for a week and be his companion at a variety of social functions.

Vivian immediately shares the news with her roommate Kit (Lara San Giacamo) who taught her the tricks of the prostitute trade. The manager (Hector Elizondo) of the Regent Beverly Wilshire Hotel takes her under his wing and tutors her in proper table manners. During a Rodeo Drive shopping spree with Edward, the suddenly upwardly mobile streetwalker picks up a wardrobe which will keep all eyes glued on her at a polo match and later during an evening at the opera in San Francisco.

Although their relationship begins as merely a business transaction, Vivian and Edward move on to a level of intimacy which is unusual for both of them. She falls in love with him and breaks her ironclad rule of no kissing on the mouth. Inspired to rethink his own operating procedures, Edward — to the dismay of his lawyer (Jason Alexander) — gives up his hostile take-over of a company headed by a hard-working shipping magnate (Ralph Bellamy). Instead he decides to help him run the company and to follow through on his new love for Vivian.

This immensely popular film boasts standout performances by both Julia Roberts and Richard Gere. Director Garry Marshall (Nothing in Common, Beaches) has stated: "What I enjoy doing are films that in some way celebrate the human spirit — where we see the good side of a human being or where the downtrodden rise." Those emphases certainly come across in Pretty Woman, which is written by J.F. Lawton. This emotionally appealing film taps into our primal feelings about money, power, pleasure, shame, intimacy, and love as a redemptive power. 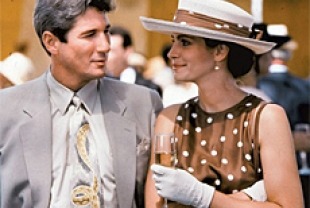