Directed by David Hare
Psychodrama at its best with the added benefit of providing a multi-faceted study of the dynamics of loneliness.

Jean Travers (Vanessa Redgrave) is a middle-aged high school teacher who lives on the edge of Wetherby, a small English town. One evening she hosts a dinner party at her cottage. Among those attending are her friends and a young graduate student named John Morgan (Tim McInnerny). Jean assumes he is an acquaintance of one of the other guests.

The next morning, Morgan stops by the cottage and admits that he crashed the dinner party. As Jean is fixing tea, he shoots himself at the kitchen table. Who was John Morgan and why did he choose to commit suicide in front of Jean Travers?

The inspector (Stuart Wilson) investigating the case shares with the schoolteacher a description of Morgan given by those who knew him: he had "a central disfiguring blankness." Then Karen (Suzanna Hamilton), another student, shows up at Jeans' cottage after attending John's funeral.

Gradually more is revealed about the troubled young man and, through flashbacks of Jean's past, we learn more about the kind of woman he chose to be present for the final dramatic act of his short life.

Directed by David Hare (Strapless, The Designated Mourner), Wetherby is psychodrama at its best with the added benefit of providing a multi-faceted study of the dynamics of loneliness. The film also touches upon themes of loss, middle age blues, and the dangers of repressing primal emotions such as love, violence, and desire. 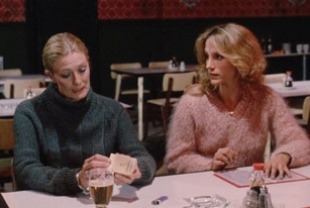