Directed by Nicolas Roeg
A weird meditation on sex, power, knowledge, and fame for those who enjoy exotic fare.

This is a British metaphysical comedy with four fictional characters who bring to mind Albert Einstein, Senator Joseph McCarthy, Marilyn Monroe, and Joe DiMaggio. Nicolas Roeg (Don't Look Now, The Man Who Fell to Earth) draws out the inner psychological nuances of the drama and delivers the philosophical freight in Terry Johnson's screenplay.

The Professor (Michael Emil) is in a Manhattan hotel working on "the shape of the universe" when a right-wing Senator (Tony Curtis) shows up and tries to convince him to cooperate with an investigation of Communists his committee has undertaken. The scientist declines: he will be busy giving a lecture at a World Peace Conference.

Shortly afterward, the Actress (Theresa Russell), a beautiful blonde, stops by the Professor's room and, using toys as props, demonstrates the theory of relativity to him. They share their exasperation over the burdens of being famous, and he refuses her offer of sex.

This long day's journey into night ends when the Ballplayer (Gary Busey) arrives to retrieve his sexy wife, and they get into a squabble in front of the Professor. The Actress can't deal with her demons, the Professor is hobbled by guilt over the bomb, and the Ballplayer realizes that his days of glory are over — along with his marriage.

Insignificance shines with some incandescent moments of acting bravado delivered by Theresa Russell, Tony Curtis, and Gary Busey. As a weird meditation on sex, power, knowledge, and fame, this is a four-star treat for those who savor exotic movie fare. 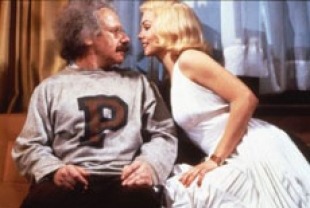