Directed by Phillip Noyce
A riveting tale of spiritual transformation that dashes the myth of island paradises and the dream of an existence unencumbered by adult responsibilities.

Maria (Wendy Hughes), mother of three children and wife of an Australian politician (Steven Jacobs), has her traditional life shattered by two events. Her beloved father dies and she learns that her husband is having an affair and it's not the first time. Overcome by feelings of loss, anger, and betrayal, Maria snatches the opportunity to escape when a friend asks her to come along for a vacation to Phuket, a resort island off the coast of Thailand.

After basking in the sun and marveling at the tranquility in this Buddhist paradise, she decides to stay on. Whereas her friend has come to the island for a change of pace, Maria needs more from the experience. She desperately wants to take charge of her own life and turn it around.

She begins an affair with Raka (John Lone), a Balinese dancer who is a self-imposed exile after touring in France. The hotel owner (Rod Mullinar) who hires her as a waitress and provides her with a beach house believes that Raka has "extraordinary power — and though he touched the source of something."

Echoes in Paradise is written by Jan Sharp and directed Phillip Noyce. In a very understated way, this Australian film dashes the myth of island paradises and the dream of an existence unencumbered by adult responsibilities. In their affair Maria and Raka exchange meanings and are each fortified to start their lives anew in their separate homelands.

When she first arrives in Phuket, Maria tells herself, "I feel like I'm taking the first deep breath in years." By the time she leaves the island, the changes in her life have come from within. 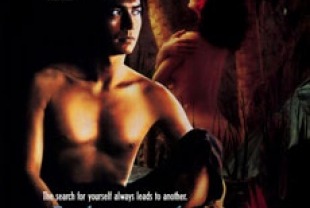