Directed by Chris Smith, Dan Oilman, Sarah Price
A humorous documentary about the subversive activities of two political activists who come up with a plan to embarrass and humiliate members and officials of the World Trade Organization.

In this humorous and subversive documentary directed by Chris Smith, Dan Oilman, and Sarah Price (American Movie), Andy and Mike set up a website that pretends to be affiliated with the World Trade Organization. These political activists are convinced that there is no reason why corporate cronies should be the only ones making decisions affecting millions of people. They want to poke fun at and humiliate these power brokers.

The opportunity to do so comes when they are invited to speak at various gatherings as WTO representatives. At the first conference they put forth the idea that votes could be auctioned off to the highest bidders. On a CNBC-Europe show, they plant a person who makes outrageous statements about the perspective of the WTO. At another conference, they advocate the return of slavery as a plan that could work in these times. Perhaps the most outrageous stunt is one in Finland at a world textile conference where Andy appears in a gold lamé leisure suit and a three foot phallus-like tool that he describes as a manager's dream with its remote cameras to watch over workers and ability to administer electric shocks to those who need discipline. Instead of being booted out of the meeting, he is given baffled applause by the attendees.

The only resistance they meet is when they take their road show to a university and try to pitch the student audience a plan to feed the starving Third World populations hamburgers made out of recycled human waste. The students are appalled at the presentation. And finally, in Australia, they report that the World Trade Organization has decided to disband. This hoax is picked up by news organizations around the world and even commented upon in the Canadian Parliament. 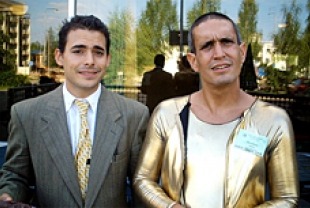