Directed by David Gordon Green
An engrossing Southern Gothic thriller that updates the abiding tale of Cain and Abel and the struggle for two boys to stay alive after their world falls apart.

David Gordon Green has made two extraordinary films: George Washington (2000) and All the Real Girls (2003). He has demonstrated a keen appreciation of the feeling textures of life and for the strange and wondrous connections between people who would not normally be interested in one another.

The director's latest is a Southern Gothic thriller, and it lives up to what he's done before. We enter the isolated and tension-ridden world of a teenage boy who lives and works on his father's backwoods hog farm. Chris Munn (Jaime Bell) yearns to express his adolescent energy, and so he does a series of pranks and gets into trouble with the law. In the opening scene, he is chatting with his girlfriend. But when he tries to awaken her later by throwing a stone through her window, he finds himself being shot at by her father and chased by a dog. He steps on a board and a nail in it goes right through his foot. He escapes and later shows his ingenuity by making an airplane out of the same board as a birthday present for his sickly ten-year old brother Tim (Devon Alan).

His father, John (Dermot Mulroney), is a quiet man who works Chris hard on the farm but lets Tim escape all the labors because of his stomach problems. The younger boy has a strange habit of eating dirt and paint to induce vomiting. He also organizes his collection of paperback books by the way they smell. John has retreated from life and become a hermit following the death of his wife. But he can no longer run away from the past when his brother Deel (Josh Lucas) arrives at the farm having just been released from prison. It turns out that John stole Deel's girlfriend and married her. It also seems that he took his brother's share of some golden coins that their grandfather left them as an inheritance.

From the moment this outsider arrives at the farm, the tension increases tenfold. There is bad blood between these men, and it is clear that the story of Cain and Abel will again be played out in all its gory and sad details. Once all hell breaks loose, the two boys run for their lives. They are taken in by a kindly black couple, set up a makeshift home in a junkyard, and then spend some time with two runaway girls.

Undertow is carried by the gritty performance of Jamie Bell who was so outstanding in Billy Elliott. Also making a strong impression is Josh Lucas as Deel, a nasty piece of work who knows how to look out for himself. The cinematography of Tim Orr accurately catches the forbidding landscape of this backwoods milieu. The music by Philip Glass mirrors the story's major theme of two young boys struggling to stay alive once their world falls apart. 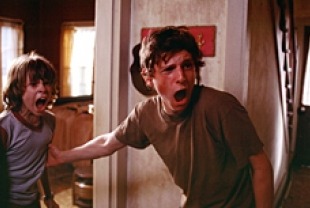