Directed by Mike Leigh
A deft and sympathetic depiction of a good person whose compassion and kindness are the real thing.

For many years now, English filmmaker Mike Leigh has explored the lives of the working poor with unflinching honesty and an uncanny ability to respect his characters' idiosyncrasies and the feisty ways they struggle to survive against the odds. In this incredibly moving film, he hits high stride in his career and delivers a masterwork that is all of one piece. The ensemble performances are remarkable for their realism; production design accurately conveys the dark alleys and shabby apartments of poor neighborhoods; and the string score by Andrew Dickinson is tender and evocative.

The film is set in London in the early 1950s. Vera Drake (Imelda Staunton) lives with Stan (Phil Davis), her husband of 27 years. She is a domestic who cleans the houses of well-to-do ladies; he works as a mechanic in a shop run by his brother Frank (Adrian Scarborough). They have two grown children, both still living with them in their small tenement flat: Sid (Daniel Mays), a gregarious apprentice tailor, and Ethel (Alex Kelly), a shy factory worker.

Vera, as her husband puts it, has a heart of gold. Although she has plenty of household chores on top of her job, she finds time to regularly visit two shut-ins, one of whom is her cranky mother. Vera, who hums methodically, is a cheerful person who believes that a special grace in life is to savor a good cup of tea, no matter what the occasion. Noticing that Reg (Eddie Marsan), is a lonely fellow, she invites him over for dinner. Everyone in the family is pleased when he takes an interest in Ethel.

Another aspect of her care and compassion for others is her secret mission to help poor pregnant women who are not willing or able to give birth to a child. She works closely with Lily (Ruth Sheen), a friend since childhood, who sells household goods on the black market and finds women seeking abortions. These poor girls, married women with too many children and wives who have gotten in trouble, have no choices other than to throw themselves on the mercy of Vera, who does not charge them anything for her loving ministrations. Their lack of options is contrasted with the situation of Susan (Sally Hawkins), the daughter of one of the rich women Vera works for. After she is raped on a date and becomes pregnant, she sees a private doctor and a psychiatrist who arrange for a calm and safe abortion at a discreet clinic for a substantial fee.

Vera's secret missions of mercy come to an end when a young woman she treated develops life-threatening complications. The police find out about Vera and Lily and are swift to apprehend them (abortion wasn't legalized in England until 1967). Much to Vera's dismay, this all takes place on the same day that they are celebrating the announced wedding of Reg and Ethel. Frank and his materialistic wife Joyce (Heather Craney) are at the party with them. Their good news that Joyce is pregnant gets lost in the confusion when the police arrive and question Vera. Anger and shock are two of the emotions experienced by Stan, Sid, and Ethel when they learn the secret Vera has kept from them for nearly 20 years.

When was the last time you saw a movie that focused on the compassion and genuine goodness of a person who doesn't live for herself but always puts others first? Look no further. Mike Leigh has created an emotionally resonant drama around the little acts of kindness that all the world's religions agree is at the center of what it means to be a fully developed human being. Vera accepts the punishment that is meted out to her, but then many good and self-sacrificing individuals have suffered for what they believe in without complaint. Vera Drake is one of the best films of 2004, and Mike Leigh is to be commended for making a hero out of a kindly woman who does her best to help the less fortunate around her. 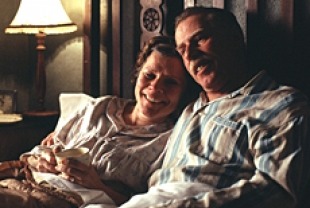