Directed by Pedro Almodovar
A valentine to the film noir genre and its capacity to depict the strange things people will do to fulfill their forbidden yearnings.

In this valentine to noir films, Pedro Almodovar has concocted a labyrinthine drama that involves deep yearning, story-telling, transvestites, filmmaking, Catholic education, blackmail, sexual abuse by a priest, drug addiction, tributes to classic movies, multiple identities, and murder. To sustain this heavy thematic load, he uses many flashbacks and an abundance of dramatic surprises. However, unlike his previous films Talk to Her and All About My Mother, whose characters touched our feelings, Bad Education does not contain one person who arouses our sympathies: they are all selfish individuals trying to pleasure themselves and move ahead in the world without paying any attention to common codes of decency and respect for others. Still Almodovar has many fans, and no doubt they will savor this complex tale about the strange things that people will do to fulfill their forbidden yearnings.

In Madrid in 1980, film director Enrique Goded (Fele Martinez) is looking for his next project. He cuts articles out of newspapers and muses over their meanings. Then Ignacio (Gael Garcia Bernal), a childhood friend who attended the same Catholic school that he did, arrives with a story he has written about their past. He is now an actor who wants to make it big in movies. The story, called "The Visit," is set in 1977. Ignacio has become a drag queen named Zahara, who sleeps with a man only to learn that it is Enrique, his boyhood lover. She goes to the school they once attended and confronts Father Manolo (Daniel Gimenez-Cacho), the school's principal, telling him that he must pay one million pesetas or she will reveal all about one night in 1964 when he discovered Ignacio, the object of his own affections, with Enrique. In order to stop him from expelling Enrique, Ignacio had sex with Father Manolo.

When Enrique finishes reading "The Visit," which has a surprise ending, he decides to make it his next film. Ignacio, or Angel as he is now called, wants to play the role of Zahara. Meanwhile the filmmaker decides to visit Ignacio's mother and much to his shock discovers that Ignacio died three years earlier. That makes perfect sense to him since today's Ignacio didn't look at all like the boy he loved in Catholic school. Father Manolo has now left the priesthood and goes by the name of Berenguer. When he turns up on the set, there are more revelations that stun Enrique — including the real account of how Ignacio (Francisco Boira) died.

Bad Education is a playful example of Almodovar's interest in the deep riches of the film noir genre. 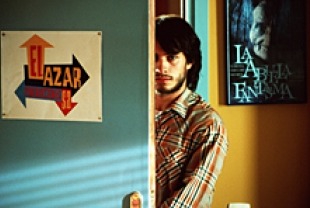