Directed by Marc Forster
A convincing and tender depiction of the ties between imagination, play, and creativity.

English writer Max Beerbohm wrote that James Barrie, creator of Peter Pan, "stripped off himself the last remnants of a pretense of maturity. . . . Mr. Barrie is not that rare creature, a man of genius. He is something even more rare — a child who, by some divine grace, can express through an artistic medium the childishness that is in him."

Barrie's playfulness is brilliantly conveyed in Finding Neverland, one of the best films of the year. Never has any story done such a tender, convincing, and enthralling job of depicting the ties between imagination, play, and creativity. The key is a heart-affecting and fluid screenplay by David Magee based on Allan Knee's play The Man Who Was Peter Pan. Director Marc Forster (Monster's Ball) has fashioned a movie that will appeal to young and old alike due to its extremely likable characters and involving story. It successfully blends substantive themes with light-hearted fun and silliness. Everything in a delicate drama like this one is in the small details — and there are many here — where life surprises and challenges us with abundant delights.

In 1903 London, loyal theatre-goers arrive to see the latest production by Scottish playwright J. M. Barrie (Johnny Depp in an Academy Award-caliber performance). The American producer, Charles Frohman (Dustin Hoffman), has high hopes that it will be a smash hit. But the playwright nervously paces backstage, eying the crowd through a side curtain with apprehensiveness. When the drama begins, he sees the bad result in people's faces, including the worst sign of all, a man asleep. At the reception later, he tells an elderly couple that he can do better.

Barrie's daily routine involves walking his St. Bernard dog Porthos in Kensington Gardens. One day he meets Sylvia Llewelyn Davies (Kate Winslet in another impressive performance) and her four sons. Barrie is immediately taken with these playful children and entertains them with a game in which they are to imagine that Porthos is a bear and he is dancing with him. At home, his beautiful but bored wife, Mary (Radha Mitchell), informs him that Sylvia was recently widowed; she is the daughter of the famous artist and novelist George du Maurier and the aristocratic heiress Emma du Maurier (Julie Christie). Mary invites the family to dinner and while she tries to impress the women with matters pertaining to status and charity, Barrie goofs off with the boys. That Mary is so embarrassed by his behavior is a sign of the emotional gulf between them. Convinced that she has no interest in his playful ways, he has excluded her from his fantasy world. It is no wonder that she turns to another man for love.

Meanwhile, Sylvia and her boys prove very interested in Barrie's alternate worlds of cowboys, Indians, pirates, and daring rescues from danger. He offers them use of the summer cottage that he and Mary never use, and they are very grateful. Barrie is fascinated with young Peter (Freddie Highmore, an incredibly gifted child actor), who seems to be a creative soul but who is still tormented by the death of his beloved father. The playwright gives the boy a notebook and encourages him to write.

Gossip begins to spread about the inappropriateness of Barre's relationship with a widow and her boys when he is married. But he enjoys their company and feels no need to conform to society's standards. He continues to see them even in the face of Emma's obvious dislike of him and her feeling that he has displaced her in the hearts of her daughter and grandchildren. Barrie draws inspiration from his games with the boys to create a new play called Peter Pan, or the Boy Who Wouldn’t Grow Up. In several scenes, we see the creative process at work. When he is greeted at the door by the boys' stern grandmother, Barre imagines that she has a hook for a hand. Seeing the boys' jumping on their beds, he turns the image into the familiar one from his play when the children fly out the window.

Peter Pan goes into rehearsal, and Barre's ever-patient and hopeful producer Frohman worries about another flop but indulges his plans to have an actor dressed in a dog suit and others flying through the air on pulleys. He even leaves 50 seats unsold for some special opening night guests. As he works on the play, Sylvia sees less of Barrie and waits for the time when he will tell her more about his fantasy world called Neverland.

This enchanting movie will transport you to a realm where playfulness is revered as a counterpoint to all the tragedy, pain, suffering, and disaster in the world. For Barrie, the key to enduring setbacks is to transform them by the magical powers of the imagination. He aims to show Sylvia's boys, and the theatre going public as well, that grief and loss, while real, do not have the last word. For all of us, there is a Neverland where things have their own special meaning and charm, a place always accessible to those who believe. This, of course, is a profoundly spiritual message.

Young Peter attends the premiere of Barre's play and the reception afterwards. A woman comes up to him and declares that he must be the "real Peter Pan," but he points to the playwright and says, "But I'm not Peter Pan, he is." By the end of this movie, you will find that you, too, have a Peter Pan within who wants to come out and play. Indulge yourself, and you will find how deeply this endearing movie has worked its magic upon you. 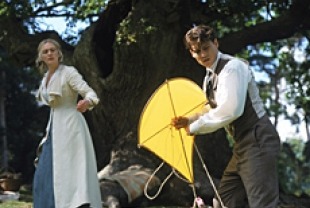 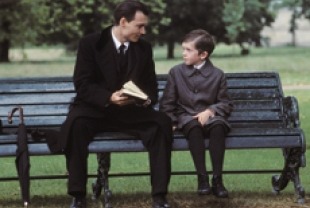