Directed by Bill Condon
A treasure trove of thought-provoking material on love, sex, science, ethics, and the crowning touch of creation: diversity.

Robert Stein has pointed out that sexuality is a metaphor for "all those spontaneous, irrational, unpredictable qualities of soul which are always a constant threat to the 'well-ordered life.' " Americans have always had a love/hate relationship with sex. On the one hand, the media and advertising establishment use an unending parade of seductive women, men, and children to keep us entertained or to sell us something. On the other hand, sex is viewed as sinful and to talk about it openly is taboo. Conservative Christians rail at the hedonism of contemporary culture and are convinced that only a return to traditional values can stem the tide of pornography and unacceptable sexual behavior in the country. In Talk Dirty to Me, Sallie Tisdale sums up the situation: "The result is cultural puberty: lewd, leering, intensely curious and ashamed and prudish all at once. Americans have lost their minds over sex; sex is a stick in the American eye. People can't see past it."

Into the fray over this controversial subject comes Kinsey, a biopicture of the man many see as responsible for unleashing the much tarnished sexual revolution in America. Writer and director Bill Condon (Gods and Monsters) does a masterful job conveying both the private trajectory of this sexologist's life and the impact of his work on a conflicted society.

Alfred Kinsey (Liam Neeson) is a Harvard-educated zoologist who finds himself caught up in a meticulous study of gall wasps. He bears many psychological scars from the disappointment expressed about him by his Sunday School teacher father (John Lithgow) and as a result is very awkward with people. While teaching biology at Indiana University, he meets Clara McMillan (Laura Linney), a soulmate who loves science and the natural world. The bug scholar finds his interest shifting when he and his new wife are forced to see a doctor for advice on a sexual problem they are having. Both of them are virgins. Kinsey realizes that there are many other couples and students who have no scientific guidance on sexual matters: it is only taught in a hygiene class where the straight-laced professor (Tim Curry) teaches abstinence as the answer to any question.

With the permission of the university's president (Oliver Platt), Kinsey begins teaching a marriage class. It is soon packed with students who are stunned by the frank way he discusses sexual behavior. From the outset, Kinsey is convinced that diversity is built into the created world and that no two people or animals are the same. The energized teacher is given a grant from Rockefeller Foundation to explore human sexual behavior through one-on-one interviews with hundreds of men. Among his researchers getting men to talk candidly about their sexual histories are Clyde Martin (Peter Sarsgaard), Wardell Pomeroy (Chris O'Donnell), and Paul Gebhard (Timothy Hutton). The result is the 1948 publication of Sexual Behavior in the Human Male, an immediate bestseller that stirs up discussion in homes and campuses across the country. Of course, many moral and religious leaders are outraged by the findings that men secretly admit to having much more premarital, extramarital, and homosexual activity than anyone had ever imagined. The findings hit home to Kinsey, who has a sexual affair with Clyde Martin. Some of his researchers are also involved in "swinging." Clara, Kinsey's wife, who has been at home raising their children, is taken aback by her husband's actions, and she sees the disarray that results from the wife swapping going on around her. When she expresses her sexual needs, her husband is the one who is surprised.

Writer and director Bill Condon skillfully deals with the controversial career of this sexologist and manages to lighten up the subject with welcome comic moments. The love relationship between the intense and obsessive Alfred and the more down-to-earth Clara is at the heart of the drama. She is a calm port when the storm clouds gather over their heads following the publication of Kinsey's second volume on women's sexual behavior. A firestorm of hatred for the researcher and his staff comes to the fore in Indiana, the Rockefeller Foundation withdraws their funding, and Kinsey descends into a miasma of paranoia and self-destructiveness.

This film could not be more timely since America seems to be in the same mood now as it was in the 1950s regarding tolerance for the diversity of sexual orientations. Kinsey is a treasure trove of thought-provoking and soul-stretching material on the meaning of love, sex, ethics, morality, and science. 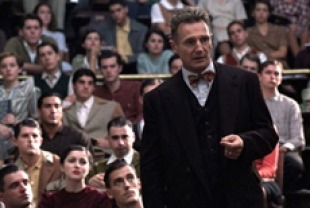 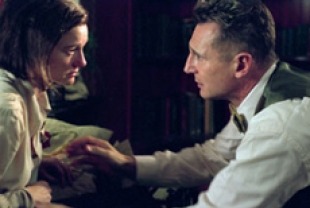 R - pervasive sexual content, including some graphic images and description