Directed by Chazz Palminteri
Marks the feature film directorial debut of Chazz Palminteri who has crafted an emotionally-affecting drama about four lonely individuals who are opened to love on Christmas day.

Many people still think of miracles in terms of weeping statutes in churches or extraordinary healings at sacred sites around the world. But amazing things happen all around us all the time. Walt Whitman and other poets have noticed this, but there still remains a cynicism afoot in the culture that denies anything beyond reason's ability to comprehend. Spiritual writer Dan Wakefield has written: "We can prepare ourselves for the possibility of miracles in our lives. We can create an atmosphere in which miracles — at least in the categories of transformation and healing — are more likely to occur."

We recommend that you prepare yourself for the miracles that come in Noel, a film set in New York City at Christmas, a time when many lonely people feel cut off and alienated from those who are enjoying the communal and joyous dimensions of this holiday. This is the first feature film directed by Chazz Palminteri, a well-known movie and theatre actor. The screenplay by David Hubbard is not afraid to deal with coincidences and events that cannot be pigeon-holed by the head but are no stretch at all for the heart.

Rose (Susan Sarandon) is a middle-aged book editor who is intending to spend Christmas Eve with her Alzheimer's afflicted mother in the hospital. As associate at work suggests that what she needs is to quit putting the needs of others above her own pleasure. When Marco (Daniel Sunjata), a handsome young man in the office, asks her out for dinner, she accepts. But his romantic overtures back at her place are too much for the self-abnegating Rose, and he leaves. Later in the evening, she meets Nina (Penelope Cruz), a beautiful young woman who has just had a fight with Mike (Paul Walker), her possessive fiancé who is jealous of every man who looks at her. The two women, who are not up for the festive mood of the day, share their feelings. Rose also encounters Charlie (Robin Williams), who is very grateful for her words of love to his relative who is in a room across from her mother's. His transformative effect on her spirits is a joy to behold as she finally opens up emotionally to a doctor who wants to take her out.

Mike, a policeman, meets Artie (Alan Arkin) in a restaurant and is followed home by this stranger. It turns out that Artie is convinced that Mike is the reincarnation of his deceased wife who died in a tragic accident. When the policeman learns more about this sad man's past, it strangely reveals the destructive forces that jealously can set in motion. Mike, given a chance to do good on Christmas, speaks a word of forgiveness that is deeply moving to Artie; he's been waiting for years to hear just such a blessing.

The final lonely soul in this drama is Jules (Marcus Thomas), a street hustler who has his hand broken so that he can go to the hospital emergency room. The happiest time in his life was when he was 14 and attended a party in a hospital on Christmas. But nothing can ever be repeated. A kindly therapist gives him a fresh slant on his mother.

One of the lines used by the production company to promote this movie is "Miracles are closer than you think." Don't listen to critics who tell you to avoid this drama like the plague because it floats on successive waves of sentimentality. Allow yourself to be open to the possibility of miracles — just like the four central characters who initially are closed off from others — and let yourself re-experience the greatest Christmas gift of all — love. 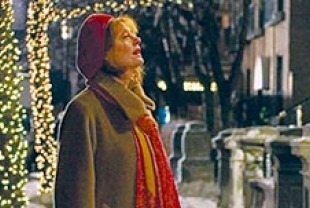