Directed by Jean-Pierre Jeunet
A romantic film to take to heart with its incisive portrait of a determined young woman's unswerving love.

French director Jean-Pierre Jeunet and actress Audrey Tautou, who showed their immense talents in Amelie have been re-united with each other in this World War I romantic drama filled with colorful characters. In the midst of the terrors of trench warfare and the surprises of sexual politics, one determined young woman sets out to locate her fiancé who is missing in action. From the opening sequences where the voice-over narration of Florence Thomasssin sets the stage for what is to come, we know that we are in good hands and that this romantic saga will be something completely different from others in the genre.

Mathilde (Audrey Tautou) is a perky young woman who has a limp due to a childhood bout with polio. She lives on a farm in Breton with her Aunt Benedicte (Chantal Neuwith) and Uncle Sylvain (Dominique Pinon) and receives a regular stipend from an inheritance left by her parents. She plays the tuba and is so acquainted with death that she often repeats the mantra "ashes to ashes, dust to dust." But in her heart is a fierce and loyal passion for Manech (Gaspard Ulliel), her childhood boyfriend and fiance who is the son of a lighthouse keeper. When he goes off to the trenches of World War I, she is very lonely and confident that he will return. She even plays fate games with herself to try and insure his safety.

But in the early scenes of the film, five French soldiers, who have been convicted of self-mutilation to escape duty, are sentenced to death. They are marched to the no-man's land between their comrades' trenches and the Germans to fend for themselves without guns. Along with Manech, who is suffering from shock, are Bastoche (Jerome Kircher), Six-Sous (Denis Lavant), Ange Bassignano (Dominique Bettenfeld) and Benoit Notre-Dame (Clovis Cornillac). When Mathilde decides to find out for herself what really happened to Manech, she hires private investigator Germain Pire (Ticky Holgado) to find out more about these men. Through letters, photographs, interviews with war survivors, news items, and trips to a wartime archives unit, Mathilde begins a complicated and energy depleting quest that gives her an overview of the brutality of war, the arbitrary decisions made by commanders, and the heroism of ordinary men who are just trying to stay alive in the hellholes of the trenches with bullets whizzing overhead and bombs strong enough to blow holes in the ground surrounding them.

The French director has taken several cues from Steven Spielberg's Saving Private Ryan in his realistic portrait of warfare. He has given a minor role of a soldier's wife to Jodie Foster who, speaking French, pulls off this small part with the requisite simplicity and dignity. There is also the sad tale of a woman seeking vengeance for her lover — one of the five men treated so harshly by the military. But the emotional center of the film is Audrey Tautou, who shines as Mathilde, a woman who suffers one setback after another and yet refuses to give up her quest. Her yearning for Manech is an ardent flame that is maintained in the face of innumerable disappointments, dead ends, and mistaken notions. For all romantic souls, this is a film to savor and take to heart. It depicts the unswerving course of true love. 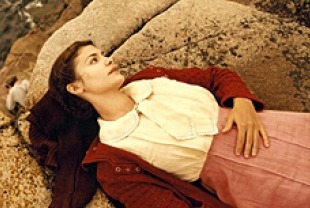 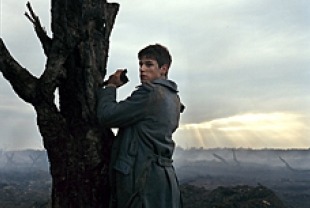