Directed by Mike Nichols
A scorching examination of the shadow side of love and the use of language as a weapon of mass destruction in intimate relationships.

Patrick Marber's brilliant and scathing stage play is about the L word and all the feelings that come with it — desire, jealousy, guilt, betrayal, revenge. The most staggering revelation of this intense drama is how language can become a weapon of mass destruction in sexual politics, destroying intimacy and leaving individuals violated and scarred. Words can be as lethal as a well-placed karate kick when they are uttered in the pitch of battle. And these characters know just how to wield them.

Director Mike Nichols has taken the play, adapted for the screen by Marber, and crafted it into a dance of ten sequences during which two couples fall in love, turn away from each other, and do terrible things to those they claim to have held dear. The scorching emotional intensity of this movie will speak to those who remember the pull of sexual desire when first meeting a candidate for their love as well as those who still recall the sting of betrayal when love flees leaving behind nasty feelings of resentment and worse. This is not a film for the faint of heart or those or cannot abide the spikes of contemporary language.

In the opening scene, Dan (Jude Law) sees Alice (Natalie Portman) walking towards him on a London street. He can't take his eyes off her, and she returns his gaze. After pausing at the corner, she steps in front of a cab and suffers cuts to her face and leg. From the ground, she looks up at him and says cheerfully, "Hello, stranger." Dan, a writer of obituaries, accompanies this pretty young woman to the hospital. In the emergency room waiting room and later walking to his workplace, they share snippets from their lives and flirt without reserve. She is from America where she was a stripper. This waif-like woman says she's on an expedition but does not clarify what that means.

In the next sequence, Dan is living with Alice and has written a novel about her. Anna (Julia Roberts) is taking his photograph for the book jacket. She is separated from her husband, and Dan is sexually attracted to her big time. Quite reserved, she allows him to kiss her. Alice shows up and says that she wants her picture taken. Dan leaves, and Anna learns that Alice may be young but she's no dummy: she has sensed what went on between Anna and Dan and is both hurt and jealous.

The final major player in the drama is Larry (Clive Owen), a dermatologist who in his spare moments at the office likes to visit an internet chat room to talk dirty with strangers. He links up with a woman who calls herself Anna and is able to match his rude and crude sexuality in word games. His correspondent is actually Dan, who is passing himself off as a hot chick; he suggests getting together at the Aquarium. When the doctor shows up, he meets Anna, who quickly figures out that the mischievous obit writer is the one orchestrating the meeting. Despite this odd start, Larry and Anna are attracted to each other and are soon dating.

The two couples intersect a while later at an exhibition of Anna's photographs, including one of Alice. Dan is serious about having an affair with Anna. The men eye each other cautiously, and the doctor tries to size up Alice in order to better know the competition. By now, the four are caught up in a dance of attraction and repulsion that will lead to verbal explosions and some violent arguments, painful separations, and surprising choices.

This feisty film challenges us to consider what it really means to be close in an intimate relationship. Is there such a thing as being too close for comfort? What role does truth-telling play in strengthening a relationship, and what does lying do to it? At one point Larry calls the heart nothing more than "a fist wrapped in blood" (what an image!). These four characters all have difficulty dealing with their emotions, especially those connected with clinging and pushing away. They are locked into maladaptive habits of distrust, betrayal, deception, and the need to know. The latter is a particularly destructive need given the importance of mystery in human intimacy.

The performances by Julia Roberts, Jude Law, Clive Owen, and Natalie Portman couldn't be better. One of the characters states: "Everything's a version of something else." True, but not completely true. Closer is something completely different: a scorching examination of the shadow sides of love. 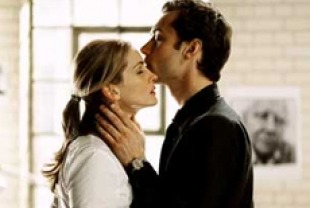 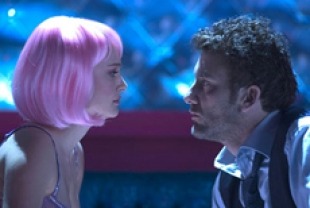