Directed by Clint Eastwood
A powerful emotional drama about a woman boxer, a crusty old trainer, and the circumstances that draw them together for a journey of the heart.

Frankie Dunn (Clint Eastwood) owns a run-down Los Angeles gym where he trains several boxers. Although he's been in the fight game for years, the dream of handling a champion still burns brightly in his head. He has high hopes for Big Willie Little (Mike Colter), an African-American fighter, but he doesn't feel that he is ready for what will likely be his one shot at the title. When he is, Willie leaves Frankie for a manager he thinks has better contacts. It's the kind of disappointment the crusty old trainer seems to be used to. He watches Willie win the championship using all the skills he taught him.

Eddie Scrap-Iron Dupris (Morgan Freeman) has been working for a long time at the gym and knows that his boss carries many burdens. Frankie was the cutman in one of Scraps' fights that turned bad; he tried to get him to quit but, since he wasn't his manger, couldn't order him to stop. Afterwards, Scraps lost an eye, and Frankie still feels he's partly to blame. Another scar from his past is behind Frankie's daily attendance at Mass. The Catholic priest there knows only that Frankie is estranged from his daughter; she returns all his letters unopened.

At the gym, Scraps is looking after Danger Barch (Jay Baruchel), a rube from the South who thinks that he can defeat Tommy Hearns, not knowing that the fighter retired years ago. Then Maggie Fitzgerald (Hilary Swank) shows up and asks Frankie to train her. He wants nothing to do with women boxers and the freak show atmosphere that surrounds their matches. Maggie tells him she's tough but he responds, "Tough ain't enough." She's paid for six months at the gym, however, so he can't get rid of her.

Maggie works days as a waitress and in the late afternoons and evenings works out at the gym. She is so poor that she has to steal leftover meat off her customers' plates just to have the energy to keep going. When Frankie tries one more time to change her mind about the fight business by pointing out that at 31 she is too old to ever make it, she responds with a line that seems to poke through his consciousness: Fighting is "the only thing I ever felt good doing." Frankie caves in and tells her that he will work with her until she wants to choose a manager.

Rule number one is to protect yourself at all times. Maggie has trouble with that one and has to learn better concentration. She finally begins to move in the ring with more ease and develops an aggressive series of punches in bunches. She wins twelve fights in a row, knocking out most of her opponents in the first round. That makes it hard for Frankie to find her any competition. Eventually, he takes her to England, where the crowds are soon chanting her Gaelic nickname.

Maggie, like Frankie, is haunted by family problems. After a match nearby, she suggests that they go visit her mother (Margo Martindale), who lives in a trailer. She is one reason Maggie's grown up thinking she's "trash." Her family laughs at what she's doing and even complains about the house she's bought them, saying they'd rather have the cash. Witnessing all this, Frankie recognizes something in Maggie, and they bond in a way much deeper than trainer and boxer. From that moment, it's clear these two will go the distance with each other.

Clint Eastwood (Mystic River) directs Million Dollar Baby with great respect for the slow miracles that draw very different people together in ties that touch the heart and the soul. The screenplay by Paul Haggis is based on a piece in "Rope Burns: Stories from the Corner" by one-time cutman and fight manager Jerry Boyd writing under the pen name of F.X. Toole. Although both Girlfight and Against the Ropes have also dealt with boxing, this gritty film will speak to followers of the sport with its telling details of what goes on inside and outside the ring. This added value comes through the voice-over narration provided by Scraps.

It is often said that if we are not able to get the love that we need from members of our family, we can turn to others for this sustaining and powerful emotion. In the final segments of Million Dollar Baby, Clint Eastwood explores the redemptive power of love which happens when a person sets aside self-interest and serves another without regard for the consequences. Even if you think you don't like boxing films, you must see this one for the beauty of its relationships and the strength of its story. 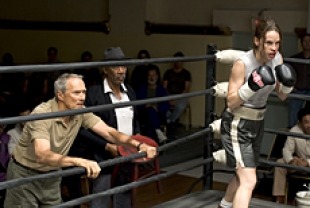