Directed by Terry George
A heroic and compassionate story of a man African who gave sanctuary to both neighbors and strangers during the 1994 genocide in his country.

We live in a world so convulsed by violence and war that many people are afflicted with compassion fatigue. When exposed repeatedly to suffering, loss, and death on a large scale, it's quite natural to try to protect ourselves by narrowing our attention to the circle of our own family and friends. This may help explain what happened in 1994 when the Western world failed to respond to the cries for help coming out of Rwanda. During a period of three months, the country's Hutu population killed more than 800,000 Tutsis. The United Nations was present as a peacekeeping force but did not have the power to intervene on behalf of those whose lives were in peril.

Writer and director Terry George (Some Mother's Son) has made an ethically rich film about the terrible genocide and the horrific indifference of the West in the face of this slaughter of men, women and children. He is to be commended for taking on this brave project in a time when the world is turning its back on the suffering in the Darfur region of Sudan. Perhaps Hotel Rwanda will stir the souls of those who see it to join with humanitarian and human rights groups to pressure governments to stop the continuing violence in Africa.

Paul Rusesabagina (Don Cheadle) is the meticulous and proud manager of the four star Hotel Des Milles in the Rwandan capital of Kigali. He is subservient to his Belgian boss and careful to cater to the every need of the establishment's wealthy clientele. He also knows his way around the black market in tobacco and liquor and is able to keep military and government officials placated.

Paul is smart enough to realize that he lives in a country where long-term resentments, deep unrest, and fear has pitted two groups against each other: the Tutsis, who were the favorites of the Belgians during the colonial occupation, and the Hutus, who are now in power. Every person in the country carries an i.d. card identifying his or her group. When the President of the country dies in a plane crash, the government- sponsored radio station blames it on the Tutsis and encourages the people to root out these "cockroaches" and exterminate them.

That evening Paul, who is Hutu, and his wife, Tatiana (Sophie Okonedo), a Tutsi, find their neighborhood full of soldiers. They discover their son cowering in the bushes and covered with blood. Armed with machetes, the Hutu militias have begun murdering Tutsis. At first Paul is determined only to protect his own family but his wife convinces him to expand his compassion to include their terrified neighbors. He takes them all back to the hotel, which has been abandoned by its wealthy patrons who have fled the violent country.

Paul has friends on both sides of the conflict, and he must call upon them for favors as the situation grows more critical. He bribes an angry Hutu militiaman who shows up at the hotel and demands that he hand over any Tutsis inside. Paul doesn't tell him that a courageous Red Cross worker (Cara Seymour) has just brought a band of Tutsis orphans to the hotel for sanctuary. When the beleaguered hotel manager sees the video made by a Western journalist (Joaquin Phoenix) about the slaughter taking place on the streets not too far away, he realizes that things are worse than he thought. On a trip to get supplies from an African black-marketeer who supports the genocide, Paul is told to take a road by the river that is not being used. The truck runs over some bumpy spots in the fog, which turn out to be the bodies of hundreds of dead Tutsis. Paul returns to the hotel in such a state of shock that he cannot recall how to put his tie on properly. He crumbles to the floor in a state of despair and paranoia.

Colonel Oliver (Nick Nolte), the Canadian commander of the U.N. forces in the area, feels increasingly angry by the world's indifference of to the ongoing genocide. At one point, he tells Paul that he and those at the hotel are considered to be "dirt," worthless in the eyes of the Western countries who do not want to get involved in any African conflict. In one of the most powerful scenes, the U.N is supervising the evacuation of foreigners. The Africans at the hotel watch as these privileged, lucky, and white people are ushered into buses. When some priests and nuns appear with more African children, they are informed that only the whites among them will be allowed to leave. In this one startling image, Terry George captures the abyss that exists between the rich and the poor, whites and blacks, those who have all the breaks and those who must suffer the most dreadful and terrifying circumstances of deprivation.

Hotel Rwanda is one of the best films of the year, and Don Cheadle gives a towering performance as the heroic hotel manager who demonstrates courage and compassion in the face of impossible odds. Throughout his ordeal, Paul grows as a moral individual as he sees himself afresh, thanks to his dealings with Colonel Oliver, the head of police who comes to his assistance several times, a hotel employee who hates him, and the president of the Belgian hotel and air conglomerate. Demonstrating incredible resiliency, he goes far beyond the call of duty.

Paul is being called the "African Schindler" but that kind of comparison doesn't do justice to what his caring and service to his fellow human beings signifies. This is an incredibly suspenseful movie, reminding viewers again and again that Paul is risking his life and the lives of his loved ones for others, some of whom are neighbors but many of whom are strangers. We see in him what is rarely depicted on film: total and complete empathy for those in danger. Recognizing the broad and deep dimensions of violence in a world of chaos, he responds by widening the circle of his compassion.

In his book The Future of Peace, Scott A. Hunt has written: "Even in the darkest times in our history, people of extraordinary character have lived among us, showing us a way out of the deplorable cycle of hatred and aggression. They exist this very day. It is to these people that we can turn in order to replenish our encouragement, hope, and inspiration." Paul Rusesabagina saved the lives of 1,268 Africans by standing with them at Hotel Rwanda. 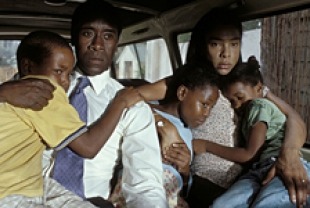 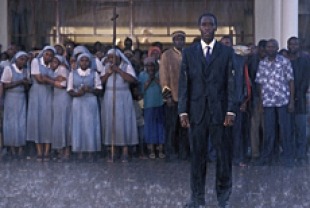